Tiffany checked in with her Facebook fans earlier today to announce her show at Molly Malones in Los Angeles tonight has been cancelled after the singer injured herself in San Fransisco on Friday. Tiffany writes:

Hello
Everyone. I’m sorry but I have to cancel tonight’s show. Yesterday while I was leaving a tv station in San Fransisco I fell down some stairs. ( go ahead laugh I did).. I was running just as fast as I could late to rehearsal for sound check. And I munched it!!!! MAN DOWN……
My ankle is swollen and painful. No bueno on the walking….
Sorry guys.
Xo
T

The Daily Times spoke with Tiffany ahead of the pop singer’s performance at the Delaware Pride Festival tonight. The late ’80s teen phenom was able to find a new audience after she began recording dance music, a move that followed several attempts to re-establish her pop career. “I wanted to become known more as a singer-songwriter, but my fans want me to do the dance music,” Tiffany explained. “I kind of do whatever falls into my lap at the time – it’s better to be busy than not. The dance thing is a lot of fun. I love the way the DJs remix my songs; I’m by no means all tricked out. I record pop records and then they’re the ones who go to town with them.”

After appearing on VH1’s ‘Celebrity Fit Club’ last year, Tiffany is ready to return to the reality television scene. “I’m going to be on ‘Hulk Hogan’s Celebrity Wrestling’ on CMT in October,” she said. “I like things that are quirky and interesting, so I figured that would be right up my alley.” The full story at delmarvanow.com has since been removed.

Tiffany was on the phone with 979X in Scranton, Pennsylvania earlier this month to talk about being on VH1’s ‘Celebrity Fit Club’. She also talked about going on the road and staying at RV parks with her teenage son Elijah, a new album coming out in June, not bombarding Elijah with the music industry, growing up in an alcoholic family, and more. 979x.com has since removed the audio.

A source tells Ann Montini of Sky News that Tiffany was upset to lose ‘Hit Me Baby One More Time’ to Shakin’ Stevens. “I really thought I had it in the bag and even though I am still famous it’s been hard to take, you know,” a tearful Tiffany reportedly said.

Tiffany tells Chris Harris of the Hartford Advocate she’s working on a dance-oriented club record, which she hopes will yield Kylie Minogue-like results. “I know that outside the United States, this record,” which is, at present, an untitled work, “will be well-received,” she says. “The U.S. market’s so finicky, though, and there’s so much to compete with. It’s oversaturated, really. So, I don’t know what will happen with this record.”

80’s pop star Tiffany was on Entertainment Tonight Wednesday to explain her recent arrests involving the collapse
of her turbulent marriage and her drunk driving charge. Tiffany broke her silence to assure fans that she hasn’t flipped her lid nor is her child in danger. Read on for a transcript.
END_OF_DOCUMENT_TOKEN_TO_BE_REPLACED

Tiffany And Hubby End Up In Jail After Fight

The Enquirer reports Tiffany and husband Junior were both arrested after the singer slammed a shovel through the dining room window of her home during a heated argument. An insider said, “Tiffany and Junior are on the road to divorce court, and their situation seems to get uglier with each passing day.”

Junior was drunk at the time and admitted to the Enquirer, “I’m a fu**ing idiot! We were on our way home and I started bringing up her affair with her boyfriend Chris Frasier, the drummer in her band. I am still devastated by the fact that I still love her and we have a son together and I can’t fix our marriage.” Tiffany’s take: “Violence never has a place in my family and will not be tolerated.”

KTLA has a video clip of their interview with Tiffany where she talked about her Playboy shoot and revealed her current rework on an album due out in May. They also have a 23 year old intern dancing to ‘I Think We’re Alone Now’ at the beginning. The clip has since been removed.

Search interest in former pop idol Tiffany exploded during the month of February on pay per search engine Overture.com. The singer’s success wasn’t because of any new songs, but her appearance fully nude in Playboy’s latest issue. Fans swarmed to the net for a free look at the 80’s version of Britney Spears, with 114,273 people searching for the pop star. Meanwhile, 12x more people searched for ‘Tiffany Playboy’ over ‘Tiffany music’, indicating the lack of interest what the singer was trying to push. The most common misspelling was ‘Tiffiny’ with 1,877 queries. 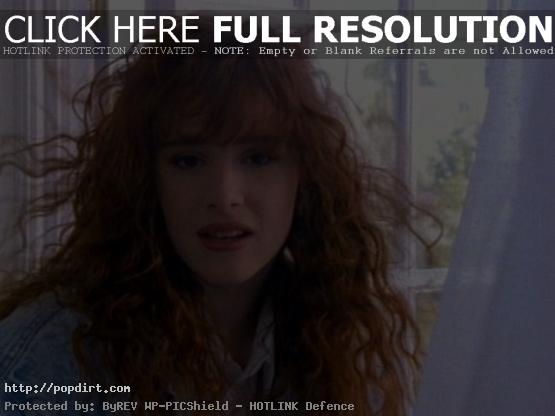 World Entertainment News Network reports Tiffany wishes she could have been as provocative as Britney Spears and Christina Aguilera during her run atop the pop charts in the 80’s. Tiffany said, “It was not appropriate for me to wear anything like a bustier or to be sexy. It was big hair and hoop earrings and jean jackets. There is no way I could pull off what Britney is pulling off now. It was a totally different time.”