Don’t know if you remember hearing about Tonya Mitchell. She was managed by Justin Timberlake and his mom and toured with *NSYNC back in 2001. Star magazine did a big article on her being the reason behind then Justin and Britney Spears breakup. She’s back. She is writing on his official myspace: “Hey babe! Long time no see… hope to hear from you soon :) Love Tonya” Cameron might watch her back. tonya’s also coming back in the biz. Check out her MySpace here. 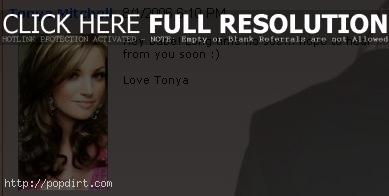 Tonya Mitchell released her debut album in 2000, and now she is back on the music scene with some new material. Her new official website is TonyaJMitchell.com where you can find four new tracks, one a jingle she performs for the new “Monster Energy” energy drink. Tonya took some time off after her first album and married and gave birth to her only child a little girl. Now she’s ready to get back to work releasing her sophomore album.

Songstress Tonya Mitchell who toured with *NSYNC during the Pop Odyssey tour has a new surprise for everyone. She’s having a baby! “Family is first priority” says the singer. Tonya has a few things up and going such as her fan board online and an official newsletter. The official newsletter is ran by a close friend of Tonya’s. Tonya was reportedly dating pop icon, Justin Timberlake but Tonya denied those rumors. “We were just friends,it was nothing like that.” 21 year old Tonya Mitchell plans to go back into the studio too record a demo and go from there. You may visit tonyajmitchell.com for the latest news.

Star magazine reports *NSYNC star Justin Timberlake was cheating on Britney Spears throughout their relationship with Tonya Mitchell. Britney had found out about the romance when she was one of the opening acts for the *NSYNC 2001 Pop Odyessy Tour and phoned Justin, only to have Tonya pick up the phone saying he was in the shower. “Britney went berserk,” said a pal. “She used every four-letter word she knew and threatened to kick Tonya’s butt. Britney swore she would have killed Justin if she could have got her hands around his throat.”