Katharine McPhee performed ‘Have Yourself a Merry Little Christmas’ after bringing Tyler Hilton on stage to join her at Koffeehouse’s Hollywood Holiday Benefit Concert & Webcast in Los Angeles on Wednesday night (December 8).

Tyler Hilton called in to Goom Radio to speak with Shelley the other day. The singer songwriter offered a bio of himself to those who don’t know him, how his music fans have discovered him thanks to ‘One Tree Hill’, the tour with Josiah Leming, how he was in high school, who on ‘Glee’ is most like him, how he doesn’t have a girl “type”, and the new EP ‘Ladies & Gentlemen’. Listen to the interview via YouTube below. 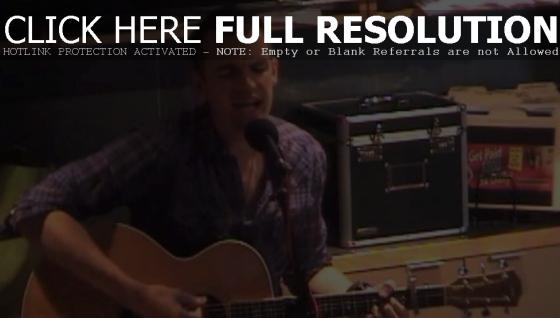 Tyler Hilton performed an acoustic cover of Usher’s ‘DJ Got Us Fallin’ In Love Again’ during a recent visit to KISS 106.1 FM in Seattle. Watch it via YouTube below.

Tyler Hilton introduced The VANue and performed ‘Sunset Blvd’ with his band on the last day of tour, in a van. “While I was on the road, having a hard time finding a place to practice with the band,” the singer songwriter explained. “We don’t always get soundcheck, when we jam with our friends, that’s why we invented The VANue, coolest venue in town.” Watch it via his YouTube channel below.

Take a look back on Tyler Hilton’s history and get a sneak peek of his upcoming album ‘The Storms We Share’, coming soon, in a sizzle reel at the singer songwriter’s YouTube channel. The video features clips of ‘This World Will Turn Your Way’, ‘Ain’t A Thing’ featuring Lady Antebellum, and more. Watch it below.

Tyler Hilton Checks In After Brief Vacation In Canada

Tyler Hilton checked in with fans on his official web site’s blog on Monday (June 28) after enjoying a few days off. The singer songwriter tells readers:

I am so excited this plane I’m on has TVs in the backs of the seats. Really, greatest invention ever. I’m headed to Chicago and then off to Boston for a couple acoustic gigs. I just got home from taking a few days off in Canada and man I feel refreshed!. Boy howdy…days off are kind of the best. Ever look around for something to work on and realize there’s just nothing to do really? That its time to “don’t do” for a second? Yea..that was me. Sometimes I have to force a vacation on myself. You know?

Tyler’s list of things he found he loved about not working, worrying, or doing in Canada at tylerhilton.com has since been removed.

Tyler Hilton ‘This World Will Turn Your Way’ Music Video

Tyler Hilton is out with the music video for his new single ‘This World Will Turn Your Way’, off the Palm Springs, California singer songwriter’s EP ‘Ladies & Gentlemen’, out now on Warner Bros. Records. Watch it via YouTube below.

Tyler Hilton brought the spirit of Cooking with Tyler on the road. Watch him and the band make road trip friendly recipes in a new segment called “Rest Stop Recipes”. The singer songwriter first checked in from somewhere in North Carolina, where he joined his bandmates to make Katie and Tricia’s Italian style grilled cheese.

Tyler Hilton Talks About The Inspiration For ‘June’

Tyler Hilton is giving fans a behind the scenes look at his new EP ‘Ladies & Gentlemen’, offering a track by track commentary of the release. The latest video is Tyler talking about the song ‘June’, written for a receptionist who sells hats online. “‘June’ is about a certain kind of girl,” the singer songwriter explained. “It’s kind of about every once in awhile you meet these girls that are so weird and so left of center and so intriguing and so interesting, you’re like, ‘What’s going on here? What’s this all about?’ The kind of person you’d probably get in the most volatile passionate fights about, but you’d also be fascinated by and probably laugh your hardest.” Watch the video via YouTube below.

Tyler Hilton has been giving a behind the scenes look at his new EP ‘Ladies & Gentlemen’, talking about the tracks off the EP. The latest features Tyler discussing ‘Keep On’. “‘Keep On’ was a song I wrote for me,” the singer songwriter explained. “It was just self medication. My grandmother had just passed away, and I was having a hard time finishing this project I’ve been working on for so long which was ‘Storms We Share’. It just was one of those moments I felt my shoulders were so heavy and I was just, damn, and I just started writing ideas and I thought I don’t want to work to hard on a song, I don’t even want to write a song. All I’ve been doing is writing songs and I’ve been in the studio, but there’s a non-work part of me that was like, yeah but writing always makes me feel so good. I was just kind of thinking one day, I was driving the car, I just want to go home and write a song really quickly, really simple, and I don’t want to think about it too much. I don’t have to record it. I just have to write something to kind of just get some of this stuff out. That ended up being ‘Keep On’, which is such a simple tune.” Watch the commentary via his YouTube channel below.