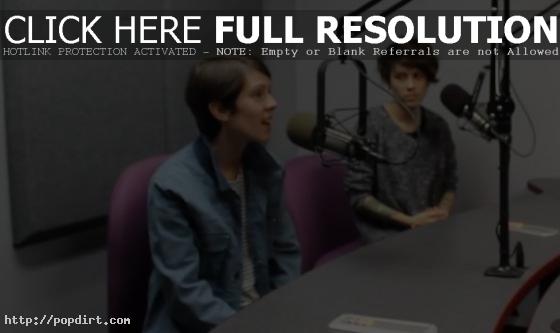 Tegan and Sara stopped by the studios at 987FM to talk with Darren Rose about their new album ‘Heartthrob’, the year and a half lag between tours as they worked on the project, how they stay in communication while living on opposite coasts, and touring with The Black Keys.

On how they were turned on to The Black Keys, Sara said, “I know that I feel that I’ve loved The Black Keys for quite a long time. I never would assume that a) we would have ever toured with them though. They were definitely a band that I really, really liked sort of from afar, and I think we heard a couple of years ago or read somewhere they were sort of maybe giving us a little props, or just saying that they liked us or whatever. I remember thinking ‘No way! The Black Keys know who we are?’ So it’s been a couple of years now, or a couple of albums really now that we’ve been familiar and been exited. I’ve actually seen them play before. I got to see them on ‘Saturday Night Live’, in the building. I was actually in the audience the night they did ‘SNL’ for this record. It was super cool. I wasn’t on ‘SNL’ you guys, but I was there in person.”

On this being their first tour in a year and a half, Tegan said, “I guess when we wrapped up our last record ‘Sainthood’, it was a year and a half ago. So we’ve been writing and recording the record ‘Heartthrob’, which comes out in January, and kind of just having a holiday. I think the most important thing an artist can do is live your life so that you have something interesting to write about. Sara and I took a full year and a half to write and record and hang out and lay on our balconies and try to get a tan, those kind of things. Got haircuts, ate breakfast every day.”

As for how often they’re communicating when living on opposite coasts, with Sara leaving Vancouver to live in Montreal and New York and Tegan splitting time between BC and Los Angeles, Tegan said, “We don’t necessarily get on the phone ever day but we have about 5,000 emails that we’ve been sending. Our business is such a huge part of our relationship at this point, but we did lots of fun socializing this year as well.”

Sara added, “We do end up spending time, to seriously answer your question, writing songs and stuff. We don’t do it telepathically, but Tegan as she’s recording she’ll send me songs and as I’m recording ideas I’m sending her songs and we’re working in a collaborative way that is very much in the future.”

Asked if their distance apart is advantageous as it gives them creative space, Sara said, “That’s what is the key to the success, is to have your own space and not be on top of each other all the time like at work and after work or whatever. If I didn’t have that space, we probably would have murdered each other at least five or six year ago.”

Talking about their new album ‘Heartthrob’, Tegan said, “Well Sara and I’s intention was not to make something that sounded like anything we’ve done before and so that was it. Sara was like, ‘I want to make a record that is unrecognizable, but undeniably good. Our intention was to pick the best songs, not get attached to a song just because we had an emotional attachment to it, but to really pick songs we thought were really great. Things that we want to sing along to. I think we had two very guitar heavy records and this record we were like, ‘We don’t need a guitar heavy record’. Sara and I have nine years of classical piano training, so we were like, ‘Let’s write stuff on keyboard. Let’s write piano stuff’. It ended up being a lot more poppy than I think we even intended. The record really reflects a lot more of our ’80s influences, a lot more of our piano, synth stylings.”