The Asteroids Galaxy Tour checked in with fans on their blog at MySpace (@theasteroidsgalaxytour) on Thursday (January 15), announcing the release date for their debut album. The Copenhagen, Denmark alternative pop group tell readers:

Many of you have sent in comments and messages asking when The Asteroids Galaxy Tour’s album is out… well, we’re excited to tell you that Fruit, their debut album, is set for release in April.

Packed full of catchy, funky gems and soulful gorgeous ballads, sung by the stunning Mette, the album features singles such as The Sun Ain’t Shining No More and the iPod Touch ad soundtrack, Around the Bend, it also features unreleased gems such as the much-in-demand Hero.

Watch this space as we’ll be bringing you a date shortly. 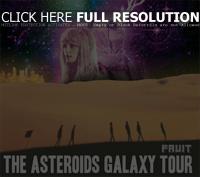