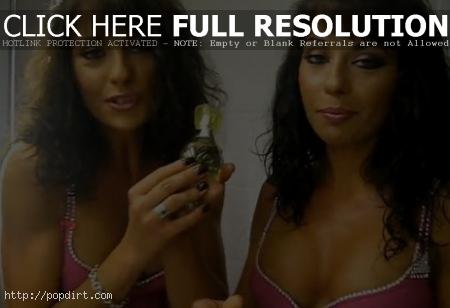 The Cheeky Girls checked in with fans on their blog at MySpace (@xcheekygirlsx) on Thursday (April 29) with a clarification about their appearance on the upcoming ‘Pineapple Dance Studios’. The manager for the twin sisters writes:

Hi guys ! This is a statement from The Cheeky Girls Tour Manager: The girls gladly accepted an invitation to visit Pineapple Studios, to meet Louie Spence and Andrew Stone, and to be filmed during their visit, without receiving any appearance fee at all. They also, gladly accepted to be invited out for a drink at 5PM in the afternoon on the same day, for an interview at the Embassy Club with Andrew Stone, chatting about their careers and to be filmed again. The girls had one drink sitting at the bar, there no people around at that time of the day, and the filming finished before 7PM. If u watch the show on Sky Channel, u all will notice that the show is a TOTAL FAKE ! Due to clever editing and even more clever misleading from the producers, the show is giving out very surprising and disturbing messages. The show producers promised a promotional opportunity for the girls. The girls also performed a dance routine at Pineapple Studios. Clearly no promise was kept, and the girls image and presence was used by the producers to reinforce Andrew Stone’s shallow image. It is a big disappointment, and I wish to assure everybody who watch the show that there is no connection, cooperation, or friendship going on between the girls and Andrew Stone. They met only once on the day of the filming, and there are no plans to meet him again.Specification: The filming took place on the 3rd of March, when at 6PM it was already dark outside. Leaving the club together, getting in the black cab, was just a scene for filming as a closure to return to Pineapple Studios, which never happened. The girls and Andrew Stone, went on separate ways. The cab never left, they just got out on the other side. So, to end this in a pure showbiz manner: ” S___T happens ! ” – keep cool