The Saturdays ‘Up’ Video Making Of 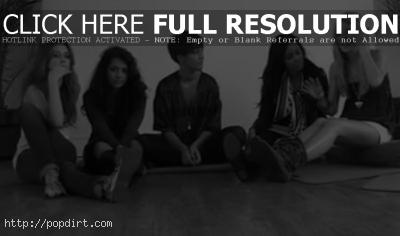 A video clip featuring The Saturdays behind the scenes while making the video to their brand new single ‘Up’ has been posed online. Frankie Sandford, Mollie King, Una Healy, Rochelle Wiseman, Vanessa White of talked about the difficulty doing the video in heels while standing on boxes.

“It’s funny because ‘If This Is Love’, we filmed everything in fast motion and things went really quick. On ‘Up’ we had to do it the other way around,” Mollie said. “We had to do it in half time.”

Rochelle added, “We had to lay on boxes horizontally but keep yourself up with your stomach muscles. It was very hard. I haven’t been in the gym in forever. I had to float my legs and arms and basically in ‘Up’, when they do post production, they turn it the other way around and take out the boxes so it looks like I’m floating.”