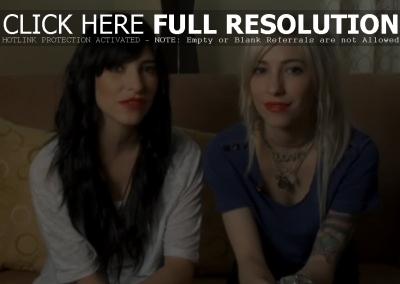 Lisa and Jess Origliasso of The Veronicas answered some fan questions submitted at MTV Buzzworthy, including their reaction to ‘Untouched’ going platinum in the U.S., relating to any of their songs at any given day depending on the experience, and their bizarre habit of licking the spices off of tortilla chips.

On what song they could relate to most on their record, Lisa said, “We can relate to any song at any given day depending on what situation we’re in. The funny thing is, when we write the record, it’s all based on personal experience. It is actually things that have come out of our lives and our thoughts and feelings on things. ‘Revenge is Sweet’ is about a relationship of mine, and ‘In Another Life’ was a relationship of Jessie’s. I guess today, what can be relate to, Jessie would say ‘I Don’t Wanna Wait’, I want to eat, because she’s eating during our interview. That would be Jessie’s soundtrack today. Mine would be ‘Mouth Shut’ because maybe I should just shut up every now and then.”

As for their funny trick on their band, Jess said, “We have this habit, especially in Australia, we have so many chips on our rider, and we like to lick the flavoring. So we lick them and we put them back, and one day the band went in and got some chips and we didn’t say anything. They were eating the chips and then they were starting to be like, ‘These are really soggy. Did you lick these chips and put them back?’ We’re like yes we did, and they were like almost vomiting and very upset.”