The Veronicas Ruthlessly Remove The Love Willows From Their Tour 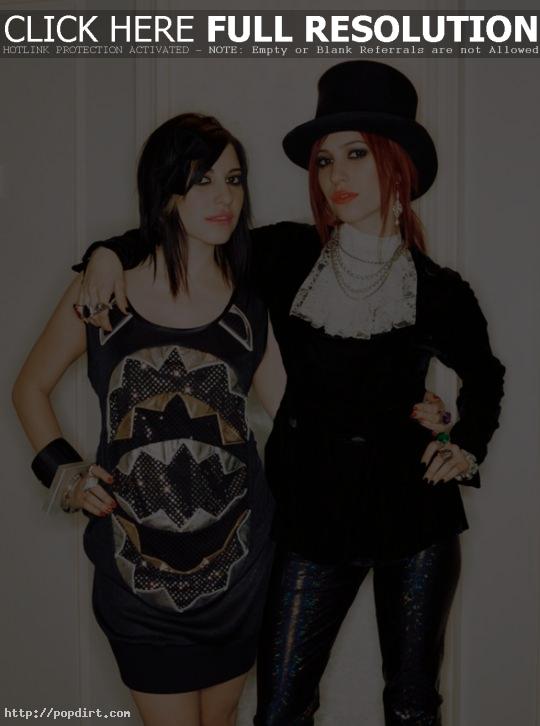 I mentioned yesterday the catty exchange between Lisa and Jess Origliasso of The Veronicas about their former tourmates The Love Willows, and more information has come to light about the situation. Ryan Wilson checked in on the indie pop group’s blog at thelovewillows.tumblr.com yesterday, explaining that not only were they off the tour, but The Veronicas apparently kicked them off the tour and replaced them with Carney. Lisa has been dating lead singer Reeve Carney for months, while Jess is reportedly involved with Reeve’s brother Zane.

Ryan says that they were never given an explanation to the ouster, which he rightly called “very disrespectful”. Given the importance of an indie band who has yet to release an album having the summer booked from a financial standpoint, for The Veronicas, who begged and pleaded fans and their label to get their second album released in the U.S., it shows a rather cruel and heartless attitude. The Love Willows were set to release their debut album ‘Hey! Hey!’ this summer on Decca, and likely would have been promoting it during the tour stops. No word how being snuffed out by the Brisbane twins may affect the release date. Wilson writes:

As you’ve probably heard by now, The Veronicas have indeed kicked us off the rest of the spring/summer tour. There were a few MySpace bulletin postings from Hope and from The Veronicas on Friday, after we received the final word from our management that we were removed from the tour. The bulletins caused quite a bit of stir on the MySpace. The Veronicas stated in a bulletin, “We didn’t kick them off the tour, we were never even made aware they were ever ‘promised’ the entire 3 months!!” Well, whether they were aware or not, we had contracts with the venues, as well as billing on the venue’s websites and promotional fliers. From my understanding, the headlining band has the final word on who is, or who is not, on the tour. The fact that we share the same booking agency should further my point. Would our booking agents remove us? We were very much in the dark as to why we were dropped from the tour. Maybe The Veronicas thought our sound was a little too pop? Or maybe because we didn’t wear all black? Or that we actually had a stage show and took the time to create stage props? Or that we had, new (’09) merchandise? We’re still yet to get a clear cut reason, answer, or explanation, but by reading through some of the MySpace comments and doing a little ‘googling’ of my own, I found out for myself that they have replaced us with a band called Carney. Oddly enough, that’s Lisa’s boyfriend’s band ;)! is that what we do now?! Does that sound like coincidence or a decision made by The Veronicas? You tell me. I find all of this very disrespectful and upsetting. We had such a blast on the last two weeks, we were really looking forward to the two months of touring, seeing you guys, and making new fans. We actually had quite a few other engagements in and around these dates that were supposed to coincide with each other, which we’ll now have to cancel. We also turned down other tour opportunities to be on The Veronicas tour, which we can’t get back, because those spots have already been filled. Hopefully we can make up for it and catch you guys soon!

Update: Jess responds on The Veronicas forum at theveronicas.com:

Hey Guys :)
Just to set the story straight.. Carney, and Theart were in Place Months ago. TLW were either misinformed by their agent.. or they were just assuming they were doing the entire tour.
We are not being sued, and have not even been contacted by TLW about taking any action RE: the ‘contract’. They are just making alot of noise, because they have no ground to stand on.
They were never promised the entire 3 months. We put them on in the first 2 weeks as a favor to CAA, the agent we are both represented by.
We suggest they take it up with their people and leave us out of it.
To suggest we kicked them off because ‘they don’t wear black’ is so silly. UMM HAVE YOU SEEN SHERMANS PANTS ON STAGE? lol!
Carney, and Theart deserve the opening spots they were promised by The Veronicas for the remaining dates.. As this is our tour, and we wanted great support bands for the fans to check out! .. plus we get kisses on the side! how cool… Zar calls it a LOVE CULT tour. Where we are all supporting each other’s bands.
And the claims that TLW had to turn down tours to do ours, must be a lie, as we were asked as a ‘favor’ to put them on because they couldn’t get any other tours. Lis and I didn’t enjoy their music.. but loved their stage setting! Very colorful.
In the end we don’t care about being told to ‘go back where we came from’ – which to me IS a racist comment.. We care more about them degrading our commitment to the fans. But in the end our actions speak louder than words.