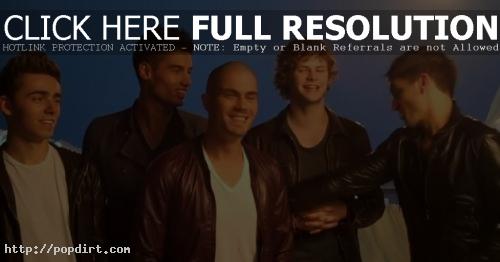 (Joking) It was a massive euphemism. Aside from that, it was released in the summer in the UK. For us, it was the song of the summer and we’re just trying to keep that summer going and maybe jump on to your own a little bit.

If they get sick of ‘Glad You Came’ since it had been out so long:

We never get sick of it. Every time we perform it it’s, you get the same buzz every time. We had a single ‘All Time Low’ in the UK and we performed that for the last two years. When a song gets you like that, it really doesn’t get boring. We got nominated for a Brit award for it as well, so it makes it even more special.

On how UK girls differ from those in LA:

On the Super Bowl halftime show:

Madonna was, 53, looking pretty good. I mean come on, I still would. If she’s not with Guy Ritchie anymore, I’m there.

On if they write their own music:

On our very first album, which we struggled to get on 50%, since then our relationship with the record label has been great. The last one we did was 70% and the combination of the two we did it’s probably going to be more than that, so it’s all about building that side of it for us, because that’s longevity, isn’t it.

So it was created in a laboratory. No, we auditioned for 9 months, got put together and we started writing the first album with some of the co-writers. Did the first single. It all moved really really quickly. In the space of 8 months we’d done a single, full tour, school tour, it went mental.