During an appearance at the Z100 Jingle Ball in New York City on Friday (December 14), Timbaland talked about wanting to work with the Jonas Brothers to the delight of the young audience, as well as working with Madonna on her new single that features himself and Justin Timberlake.

The Jonas Brothers have enjoyed big crowds at their in-store appearances, but fans in Rochester, New York were dealt the following blow from the band in a posting at the sibling group’s blog at MySpace (@jonasbrothers) on Saturday (December 15). But the guys Rochester concert at BlueCross Arena is still on. They write:

Due to the adverse weather in the Rochester area, we are forced to cancel the Verizon In Store appearance scheduled for Sunday, December 16th.

We are working on rescheduling and we will post as soon as we know when we can make it back to the Rochester area! 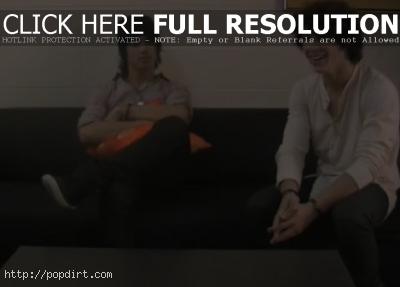 ‘The Nick J Show, Part 2: Revenge’ features Nick Jonas of the Jonas Brothers attempting to be a chat show host, interviewing his brother Joe Jonas, only to introduce him to a “special guest” that wanted to meet him.

“Hello, and welcome to the Nick J Show,” Nick said. “Well, visiting our show today is Joe Jonas. Joe! Come on! Today, we’re talking about, revenge. Everybody welcome Joe Jonas to the set.” Asked what he’s been up to lately, Joe sniffed a pillow and sneered, “Stealing stuff.”

One thought on “Timbaland Wants To Work With Jonas Brothers”