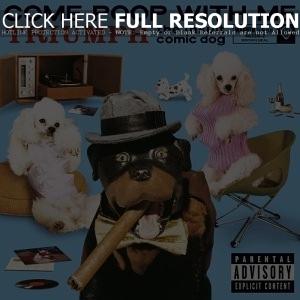 Triumph The Insult Comic Dog and the voice of Triumph, Robert Smigel, was on Fresh Air with Terry Gross on NPR. Triumph peppered his comments with references to pop stars, including Eminem and Justin Timberlake of *NSYNC, and also goofed on Gross for her much-talked about interview with Fox News pundit Bill O’Reilly, who had walked out of an interview after feeling unfairly questioned.

“This album is very close to me because I sing many songs,” Triumph said. “Some classics and some news stuff, the rock it to me, sock it to me for the kids. Both of my parents had musical backgrounds. My dad is a toy rottweiler and he sang in Yiddish theater, and my mom is an Afghan who looks exactly like Celine Dion.”

Smigel, talking about the dog character, told Gross, “Normally, I’m a 43 year old guy on my knees straining somewhere with my arm up in the arm, talking to human beings. It’s a very low status kind of performance style, so I don’t miss the puppet at all. He’s in a bag somewhere.”

As for where the dog originates, he revealed, “There’s like three or four of them. They keep getting stolen out of the prop room actually. We’ve gone through ten. It is the cheapest puppet. Well, my wife found Triumph at a furniture store that’s out of business now. Then we found the puppets were sold in the Village. It was only like ten bucks. It’s just the head. The body is like a stuffed animal. There are severed heads of stuffed animals floating in the East River somewhere that gave their lives to Triumph.”

November 12, 2003 – Contributed by ballersfantasy: Rolling Stone has counted down 25 basketball moments that rock. Here are a few the include pop stars. Britney Spears is at #3 with her video for ‘Baby One More Time’ which pays homage to her favorite sport, basketball. (Britney was a point guard on her high school basketball team.) Britney also teamed up with the NBA Development League for a series of ‘Britney 4 U’ promotional nights. *NSYNC comes in at #10 with their annual Challenge for the Children celebrity basketball game. Madonna’s relationship with Dennis Rodman comes in at #16. It wasn’t a surprise when he told-all in his autobiography, ‘Bad as I Wanna Be’ about the details of his sexual encounters with Madonna from their short-lived early 90’s fling. Aaron Carter‘s ‘Aaron‘s Party’ video comes in at #25. The song contains the lyrics: “That’s How I Beat Shaq.” Apparently Shaq had no hard feelings, as the big fella appeared with Carter in the song’s video.