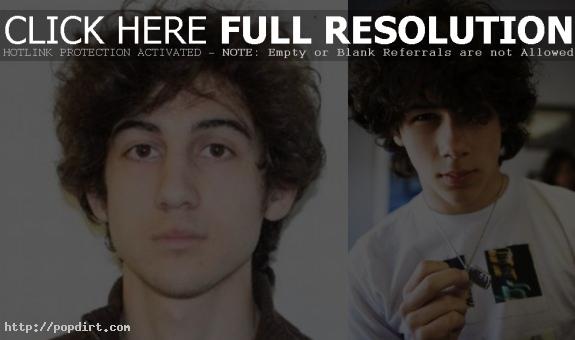 People following the hunt and eventual arrest of Dzhokhar Tsarnaev in the Boston, MA area have noticed that the terrorist from Chechnya who planted a pressure cooker bomb at the finish line of the Boston Marathon bares some resemblance to Nick Jonas of the Jonas Brothers. Dozens of Tweets compared the bomb wielding killer to the pop singer, which was a common theme during a prior manhunt on the other side of the United States in February, when Tweets were sent to LL Cool J warning the Los Angeles based rapper to stay inside due to his uncanny resemblance to Chris Dorner. Among the Tweets observing the celebrity look-alike circumstance:

nojan (@ihatenojan): not trying to be funny but this dude kinda looks like Nick Jonas

RJ (@RandJob12): And he looks like Nick Jonas mixed with a lesbian

Lilly Valentin (@lillianyv): He looks like a young Nick Jonas. and when I say “he” you all know who I’m talking about.

Allie (@louistomlimpson): MY MOM JUST SAID ONE OF THE BOSTON BOMBERS LOOKS LIKE NICK JONAS I CHOKED

Wanderlust (@genmusgrave): but what I have noticed is one of the brothers that caused the bombing looks like Nick Jonas sorry not sorry

Zach Clapper (@ZachClapper): The guy on the loose looks like a cross between Nick Jonas and Happy Gilmore’s caddy

Valentina Portela (@ValentinaAP217): Does any one else think that Dzhokhar A. Tsarnaev looks like if Nick Jonas and Nat Wolf had a gay baby?

Jenny (@howyoudoinjenny): That Jahar guy is so hot he kinda looks like Nick Jonas..his brothers quite handsome too…just a shame they’re fu**ing lunatics

Iesha. (@fvckontario): The suspect looks like a mixture between Luke Brooks and Nick Jonas?

@RavingStratford: HE LOOKS LIKE A MIX OF JAI, NICK JONAS, AND ALEX FROM THE NAKED BROTHERS BAND BYE

JACKI (@jacki_hughes): “@taylormckay: this jahar character looks like an uglier version of a Jonas brother #JustMyOpinionThough” THAT’S WHAT I SAID! Nick Jonas!!