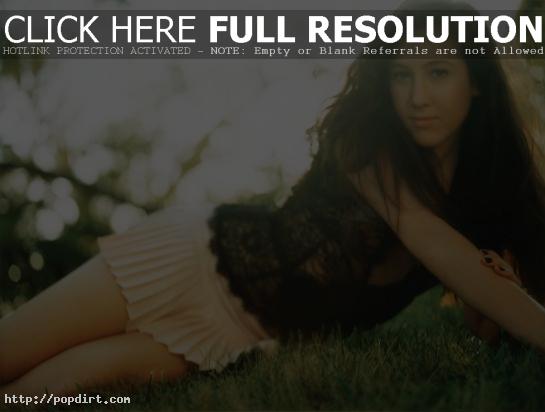 Vanessa Carlton is reclaiming her love of ballet through a song that takes her back to her teenage years. ‘White Houses’, the first single off her upcoming ‘Harmonium’, due October 19th, tells the tale of a girl coming of age, experiencing her first passions and reflecting on what she’s gained and lost in the process.

“It’s about jealousy, it’s about losing your virginity, it’s about living on your own,” she tells MTV News. “It’s a story that most people can relate to, that chapter in your life from 16 to 25, where you’re trying to figure out who you are, and you go through all these triumphs and tragedies on a daily basis, and how they shape you. It’s really the journey of one girl and her perception of her environment and how she starts out as a wide-eyed person, but everyone gets hardened by life, but not necessarily to the point where you can’t feel anymore – all these things, in one little snapshot of a song.”

June 15, 2004 – Vanessa checked in with fans on her official website’s forum on Monday night to break the happy news that she just wrapped up recording ‘Harmonium’. She writes, “I’m listening to the album as we speak. what a coup! I cannot wait for you all to hear it. The wait time is gonna kill me. I’m doing a video in a few weeks with Sophie Muller. Also the website is gonna get a makeover. I don’t know about you, but I’m sick of it now. Look out for ‘White Houses’ mid-July. And the album to follow in September. ‘Harmonium’ lives… for real …and you’re all gonna freak. I just know it.
I need sleep. Peace. V.”

May 25, 2004 – Vanessa checked in with fans on her official forum on Monday (May 24), giving an update on her new album. She wrote, “Hey all. I’m mixing my record right now. It sounds so great. I’m working on artwork (my favorite thing ever). Single is out in mid July. Album drops September 21st (not official). All in good time. Peace out my patient peeps.”

Too long.
I’m wearing an extremely itchy sweater right now. I’ll never understand how fabric can totally alter one’s mood. Anyway, I am feeling the eve of a really special year. I’ve never been in such good spirits (aside from violent scratching). My album makes me want to eat it. I’m thinkin that’s a good thing. I looooooooooove it. Don’t mean to tease, but thought you should know the wait is worth something. Also there’s a cool ‘making of’ DVD that will come out with ‘Harmonium’. Look for ‘White Houses’ in June (with a rad video). Album drops in early August. Things get pushed back for excellent reasons. See you all at the shows. Peace v. PS: Only ten songs!

March 11, 2004 – Vanessa leaked some news about her forthcoming album ‘Harmonium’, due in June, to fans on her official forum on Wednesday (March 10). Carlton writes, “Because I love you all so much (including my loyal Nessaholics) I’d like to leak some news. My label is gonna kill me, but the fan love overpowers me. Sooooooo, my first single is probably ‘White Houses’ (it so is) and guess who plays the most amazing acoustic guitar on the track!!… Lindsey Buckingham of Fleetwood Mac. That’s all I can divulge in this top -secret -under – the – rug – non label -informed email. Peace. V”