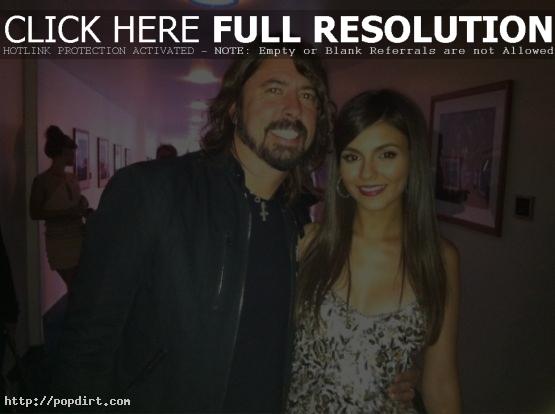 Victoria Justice checked in with her Twitter followers (@VictoriaJustice) on Sunday (August 28) before, during and after the MTV Video Music Awards in Los Angeles, which she served as a presenter. The ‘Victorious’ star was joined by Joe Jonas to introduce Chris Brown’s performance. The 18-year-old posted photos with some other celebrities in attendance. Justice writes:

On my way the VMA’s! It’s going to be a great show. Who do you guys think I’m going to be presenting with? Let’s see if you can guess ;{)

OMG guys!!! Jessie J just performed “Price Tag” & I saw someone FALL off the top balcony behind her!! I’m freaking out. I hope they’re OK!

HA HA. The funniest & most bizarre thing just happened during the Jay-Z & Kanye performance. I hope they show it, you guys have to watch.

Hanging out with my old friend Taylor Lautner at the #VMA’s :{) http://twitpic.com/6cx1an

We LOVE you Ms. Winehouse!! Thank you for inspiring me & so many others. #RIPAmy

Dont want to spoil anything, but they just played my FAVORITE Amy song of all time. Ah!! I’m so happy.

Ready for some behind the scenes VMA pics ?! I had the most amazing time ever. What an incredible show!

Here’s a pic of me & the Foo Fighters lead singer Dave Grohl! He came up to ME for a pic because his kids <3 @Victorious! Good seeing you @joejonas, I had fun! So glad you appreciate Adele as much as I do. :{) Seth Rogen, say what?! Ha ha. Super cool guy. http://twitpic.com/6cxx43 Congrats Tyler the Creator on your win tonight!! I can't include his Twitter name... It's a little dirty. Ha ha.Loved him http://twitpic.com/6cy0gs