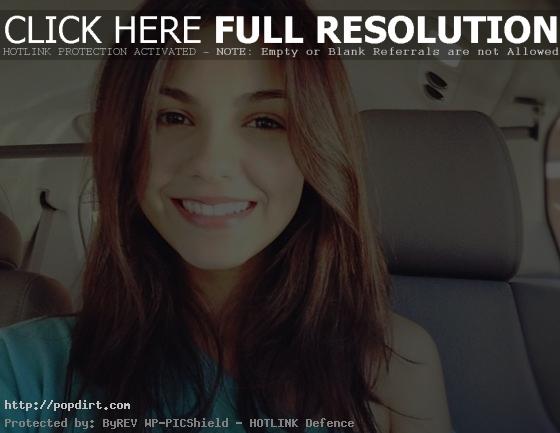 Victoria Justice dropped by Kidd Kraddick in the Morning recently, where the singer and actress talked about how her Nickelodeon show ‘Victorious’ was cancelled, her high school best friends Audrey and Danielle, whether she prefers The Wanted or One Direction, and her theory about the butts of Kim Kardashian and Nicki Minaj.

Talking about the end of ‘Victorious’ and how she learned the news, Victoria said, “I found out from my castmates. I was actually on my new movie ‘Fun Size’… I was on the set doing re-shoots for ‘Fun Size’ and I kept getting text messages from my cast members. I missed a phone call from Leon, like a test from Daniella, and she was like, ‘See ya Victorious’, I was like she’s joking, what’s happening? Then I called my mom and asked is this true, she was like, ‘Yeah, the show is over’.”

Justice added that ‘Victorious’ “is the #1 show on Nick and it’s also crazy because we found out two weeks prior that we were nominated for three Emmys.” 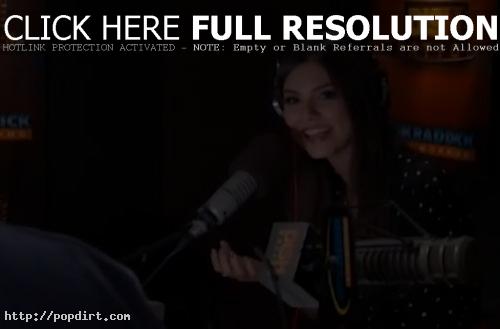 When Kidd asked about her friends Audrey and Danielle, a surprised Victoria said, “What? How do you know that? How do you know Audrey and Danielle! They’re good. They’re like my two best friends from high school. How do you know these things? Is he psychic? That’s crazy. Oh my god, that’s hilarious. Danielle, she has the weirdest last name you could ever imagine. It’s Glass.. I can’t say it.” When they knew it was Glasscock, Victoria got embarrassed and added, “Every time we’d be in P.E. together, the teachers when they were calling out roll would get so embarrassed when they got to her name. They’d be like, Danielle G., Danielle G., they would never say it.”

When asked for her preference between boy bands One Direction or The Wanted, Justice said, “I was actually in South America, Argentina for the Kid’s Choice Awards, and I got to hang out with The Wanted guys and they were really nice. I’ve met both groups. I think they’re both really cool. I’m not going to choose one. Do you think I’m crazy?”

As for the member of either group she’d most want to have dinner with, Justice said, “Honestly, it’s all about personality for me. I’d have to get to know them better. I don’t know.” Justice admitted that looks “help a little”, but she was hesitant when asked if she’d go for Harry Style’s, but agreed he looks like a little Mick Jagger.

Questioned about her butt compared to Kim Kardashian’s butt, the double entendre’s went into overdrive. “I don’t think they’re comparable. I think her butt would eat my butt. This is what I think happened, I think Kim Kardashian ate my butt and I think Nicki Minaj came and ate everyone’s butt. Nicki Minaj’s butt is like Pac-Man.”