Who Cares Who Wins ‘American Idol’ 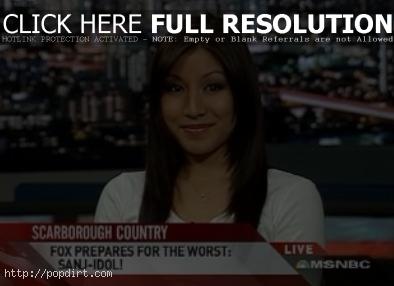 Video of the segment, which aired Thursday (April 5), at Bing.com has since been removed.

Can ‘Idol’ Producers Manipulate The Vote?

April 4, 2007 – In response to Sanjaya Malakar’s staying power, ‘American Idol’ producers claim movements like VoteForTheWorst.com and Howard Stern don’t stand a chance in the voting process. ‘Scarborough Country’ host Joe Scarborough asked former ‘Idol’ finalist Carmen Rasmusen and theenvelope.com’s Tom O’Neil if the Idol voting process is rigged. Citing the ability to jam phone lines, Rasmusen said, “I know the producers have a way to manipulate the show to get the results they want.” Video of the segment, aired Wednesday (April 4), at Bing.com has since been removed.

April 4, 2007 – ‘Access Hollywood reports Tony Bennett, who turned eighty a few months ago, is not well enough to appear on tonight’s ‘American Idol’. According to a spokesperson for the star, he has a cold.

April 4, 2007 – TMZ is told execs at Sony BMG are “really nervous” that Sanjaya Malakar could win this season’s ‘American Idol’, and that the novelty factor will quickly wear off. Meanwhile, a number of Hollywood songwriters are trying to come up with tunes that Sanjaya might be able to sing on key. Read more.

Are You More Familiar With ‘Idol’ Finalists Or Presidential Candidates?

April 4, 2007 – In an unscientific survey of people on the street, many knew all the ‘American Idol’ contestants, like Sanjaya Malakar and Lakisha Jones, but were hard-pressed to identify presidential candidates, like Sens. John McCain and Barack Obama. The segment, aired Wednesday (April 4), at abcnews.go.com has since been removed.

ZHT Talks With Stephanie Edwards, Gets Banned By ‘Idol’

April 2, 2007 – Stephanie Edwards, ousted from ‘American Idol’ a couple weeks ago, talked with ZHT’s Morning Zoo of Salt Lake City on Wednesday (March 28). Fox was very unhappy with the interview and were told they no longer were going to be able to interview contestants voted off the show. The clip ends before they explain why ‘Idol’ and Fox were upset, but the open dissing of the ‘Idol’ contract the contestants are bound to and their speculation on Ryan Seacrest’s sexuality may have been to blame. The interview audio at akamai.net has since been removed.

April 2, 2007 – A source on the set of ‘American Idol’ tells TMZ that Sanjaya Malakar’s fellow finalists are annoyed that the 17-year-old singer continues to advance. Malakar himself has been spared much of the anger, instead the hopefuls are mad at web sites like votefortheworst.com and Sirius Satellite host Howard Stern, who have been urging people to vote for Sanjaya. Read more.