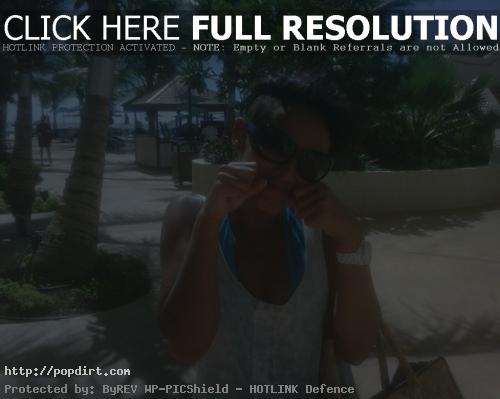 Amelle Berrabah checked in with her Twitter followers (@Amelle_berrabah) earlier today as she wrapped up a vacation in Barbados and prepared to return home to London. The Sugababes singer, who ran into ‘American Idol’ season three winner Fantasia Barrino, tweets:

Last day 2day. Just chilling on the beach 4 a couple of hours then gotta get ready 2 go back 2 the UK.x
Just met Fantasia. She’s really nice.x
There’s a music award happening 2morra night and she’s 1 of the performers.x
I think I’ve broke a bone in my foot.x
Goodbye barbados!!!!! Weep weep,x

January 8, 2010 – Sugababes talked about their New Year’s resolutions for 2010, with Jade Ewen revealing she’d like to dine at a dark restaurant. Amelle Berrabah was so impressed with the idea she agreed they should try it, though she suggested she’d like to hit a Thai restaurant called Roxy. Heidi Range said she “wants to find a really good Mexican” restaurant like Saddle Ranch, which the girls went to when recording the new album in Los Angeles.

“Basically it’s a restaurant where it’s almost like a dungeon and you cannot see anything,” Jade explained, “not even in front of you, and you are served by blind waiters and you’re sat down. The whole experience is supposed to be really good because it heightens all of your senses. You’ve got to try and guess what you’re eating and you can’t find the cutlery. You can hear voices but you don’t know where people are. In the end they’ll bring you out and ask what do you think you had? Apparently everyone that’s every been there has never gotten it right, to be honest.”