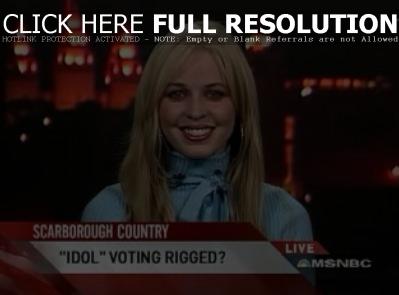 Why do so many ‘American Idol’ voters get a busy signal when they call to vote for their favorite contestant? ‘Scarborough Country’ host Joe Scarborough asked former ‘Idol’ contestant Carmen Rasmusen. Video of the segment, aired Thursday (February 22), at Bing.com has since been removed.

February 23, 2007 – With one powerful performance of ‘And I Am Telling You I’m Not Going’, Lakisha Jones staked her claim to take home the title of winner of the sixth season of ‘American Idol’. Simon Cowell said after her performance on Wednesday, “I’m very tempted to say to twenty-three people, book your plane tickets home.” And the betting public seems to agree, giving her a 26% chance of winning the show on intrade after she was at about 12% before the performance. Melinda Doolittle is the second favorite at 15%. As had been tipped off, the ‘Idol’ girls are being given double the odds of winning as the guys.

Carmen Rasmusen On If ‘American Idol’ Top 24 Are Deserving? 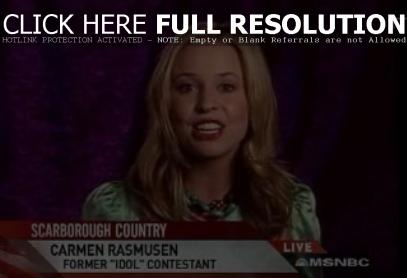 February 23, 2007 – Are the “top 24” contestants really the best of the best? ‘Scarborough Country’ host Joe Scarborough asked former ‘Idol’ contestant Carmen Rasmusen and Star magazine’s Jill Dobson. Video of the segment, aired Thursday (February 15), at Bing.com has since been removed.