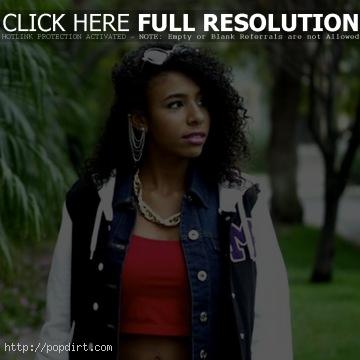 Bahamas native Angelique Sabrina is creating the next big dance craze with her debut video ‘Pull Up’, which can be viewed via YouTube below. Angelique went to Los Angeles to shoot the video with Skee TV and Fernando Cordero of Industrial Films. The video features Angelique’s own unique dance move (which she has coined as the “pull up”), as well as her distinct mix of Pop and R&B with a touch of Caribbean flavor, energy, and style.

At only 14 years old, Angelique already has a strong resume. She’s played in front of crowds as big as 20,000, and was declared the winner of Sydney, Australia’s top 5 Rising Star Countdown. She’s a student of music who started studying piano, guitar, and drums while she was just a child, and is a talented singer, songwriter, actor and dancer.

In the studio, Angelique has garnered attention from the likes of Grammy-award winner Rockwilder, whose credits include Jay-Z, Christina Aguilera, and Destiny’s Child. “Angelique Sabrina records quickly and on-point like someone who has been doing this for a very long time,” says the veteran producer. “She’s the one. She’s going to be huge.”