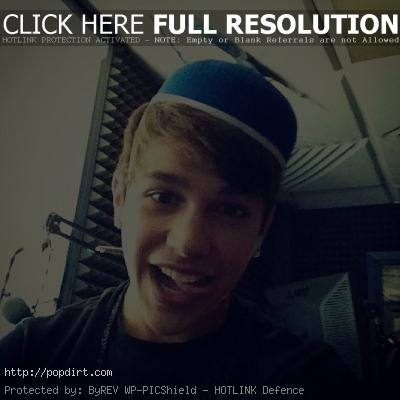 Austin Mahone was on the phone with Jeff Hurley of B104 in Whitehall, Pennsylvania the other day. The teen pop singer of few words talked about his small bedroom that’s covered with fan posters, not having a celebrity crush, where he sees himself in ten years, the future of his Ustream videos and his first single ‘Say Somethin’. Austin wrapped up doing a quiz about his name.

On his small bedroom:

I don’t know. It’s my bedroom at my grandma’s house.

On the coolest thing in his bedroom:

Probably all the fan posters on the wall.

On having a celebrity crush:

No really. I think a lot of celebrities are cute. I like (unintelligible), she’s nice. I like Kate Upton.

Where he sees himself in 10 years:

Traveling the world and just getting to know a lot more people and getting to see different places I haven’t been to before. Hopefully have a couple of albums out by then.

If he’ll keep doing his Ustreams:

I will, but I don’t have enough time to do it every week like I used to. I’ll still keep doing them.

On his first single ‘Say Somethin’:

I did it with it with Bei Maejor and Mike Posner and it’s on iTunes right now.

One thought on “Austin Mahone On His Tiny Bedroom, Ustream & Future”