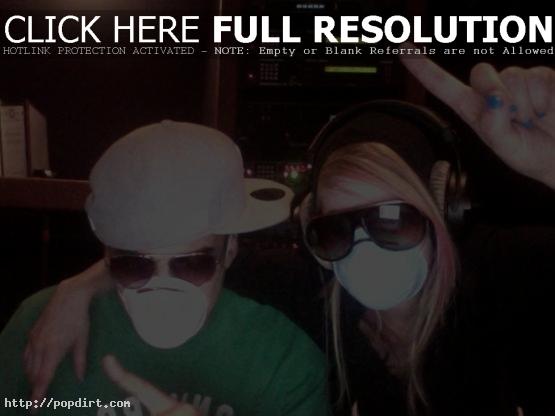 Avril Lavigne checked in from the studio with Grizzly Bear and Alex da Kid, all wearing surgical masks. “We’re working together on some songs,” Lavigne says in the video. “We’ve been here at Henson Studios for ten days straight, working until 2 in the morning, 6 in the morning, just being crazy having fun. She is 24, I’m 25. My producer is 26, so it’s kind of cool. We’re all same age. I have strep throat right now so I’m supposed to be wearing this mask. It’s much better but still very contagious.” Watch the update via YouTube below.

Avril Lavigne Discusses Her New Album, But Not Brody Jenner

May 6, 2010 – Avril was on the phone with On Air with Ryan Seacrest on Thursday (May 6) to discuss her performance in the Race to Erase MS. The pair discussed Ryan wanting to have a fragrance too like Avril’s Black Star product, how she’s “basically done” with her new album and wanting to write a couple more songs for it, and how she’s feeling inspired at the moment. “This album is kind of different, a little more mellow,” she explained. “But I’m still keeping it in that whole range where I kind of want to write a couple upbeat songs for it.”

As for her romance with Brody Jenner, Avril said, “Ryan! You’re fishing… I don’t talk about my personal life.” Listen to the interview at kiisfm.com.

May 1, 2010 – Avril was spotted leaving Voyeur with her boyfriend Brody Jenner the other night, where a paparazzo screamed if there was going to be a winter wedding for the couple as they were chauffeured away in an SUV. Watch Hollywood.tv footage below.

March 21, 2010 – Avril and Brody were all over each other at the grand opening of Drai’s nightclub in Hollywood on Wednesday (March 17), according to Hollywood Life. The gossip site spotted the couple “sitting in a booth next to one another for the entire night, whispering into each other’s ears and getting very cozy.” Also at the table was Wilmer Valderrama, who ironically had been linked to the Canadian pop singer. Read more.