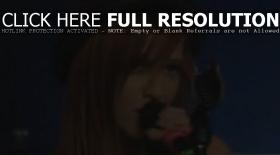 Sneak a peek inside Ashlee Simpson’s dressing room for a behind the scenes look as the singer gets prepped in hair and makeup and does a soundcheck for an upcoming Yahoo! Music performance in the sixth and final installment of ‘Being… Ashlee Simpson’.

“We are now in the car, going over to Yahoo! to do a performance,” Ashlee said in the latest video. “I’m excited because yesterday was our first day with the full band being back together, so today is the first performance with everyone.”

“Ray and I have been working together since I was 15,” Ashlee said about guitarist Ray Brady. “The first song I ever wrote was with Ray, so it’s been quite the journey together and I’ve never played a show without him.”

“My band and I are all extremely close,” Simpson continued. “We’ve had showed but there’s only been about four of us. Today we have the big band so there’s a few new members who are awesome. Sound checks are pretty laid back and easy going and we basically make sure everything is good to go for the show.”