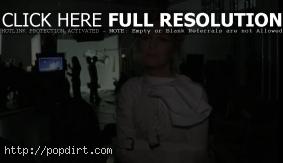 The second webisode of ‘Being… Ashlee Simpson’ is out, featuring more behind-the-scenes footage from her ‘Outta My Head (Ay Ya Ya)’ video shoot, where fans can find out what it was like for Ashlee to learn to fly. Hanging upside-down in a fashionable, Vivienne Westwood straight jacket was no easy task, but Ashlee had to learn to tough it out. Simpson had her buddy Kenna on set to make a cameo and provide some comic relief.

“Today we are second day video shoot near the Burbank airport,” Ashlee explained. “Yesterday we were in the desert, so it’s kind of nice to be a controlled environment. Today should all in all be a fun day. We’re doing some front looks so it’s hair and makeup. Everybody gets to be creative and playing lots of different characters.”

Explaining her outfit, Ashlee said, “I am wearing a fashionable straight jacket. Vivienne Westwood in there, so it’s not the complete, normal straight jacket outfit. We’re about to shoot a scene where I’m kinda going out of my head. It’s fun because I can be a little whacky.”