Blue ‘Get Down On It’ Video Featuring Lil’ Kim 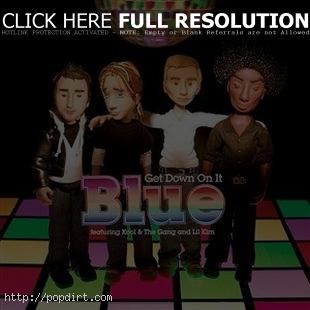 Blue are out with the video to their remake of the Kool and the Gang track single ‘Get Down On It’, featuring Lil’ Kim, from their greatest hits collection ‘Best Of Blue’. Watch the video below.

November 17, 2004 – Blue plan a grand entrance for their performance at Sunday’s Smash Hits Awards, a source tells The Mirror. After hitting it off with Olympic boxing star Amir Khan, the boy band will take to Wembley Arena’s stage dressed in boxing gowns to the sound of ‘Rocky’ theme ‘Eye Of The Tiger’ and Europe’s ‘Final Countdown’. “Lee and Duncan met Amir at a charity event last month and they’ve become good friends,” the source explained. “Record company bosses are spending twice as much money on them than on any other act, so expect something spectacular. They want to go out with one big bang.”

No Breakup For Blue, Just A Break

October 17, 2004 – Blue tell Radio 1 they have no plans on splitting up anytime soon. “The reason why so many bands do split up is because of the pressure cooker they are in from the record companies, they’re here, there and everywhere, they just internally combust,” a band member said. “So if you don’t have a break and go off and do individual stuff, you’re going to just split up, but we don’t want to do that. We want to go away and come back refreshed, with new experiences under our belts.”