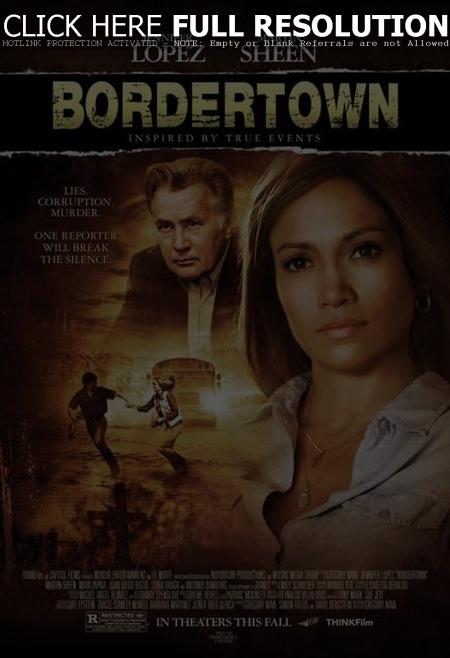 The Associated Press reports Jennifer Lopez is calling ‘Bordertown’ a life changing experience for her. The singer and actress plays a reporter who tries to solve multiple killings of women in a Mexican border city. J.Lo brought the project to he Berlin film festival Thursday. “I really couldn’t believe this was going on, and the more I found out about it and the more real it became to me, I really felt like it came to me for a reason,” the 38-year-old said at a news conference.

Jennifer Lopez Is Ready For Little Ones

February 9, 2007 – Page Six Magazine caught up with Jennifer, and asked the singer/actress if she and Marc Anthony plan on having children together. “Yes,” she responded, patting her tummy almost subconsciously. “When I got married a few years ago, I decided that I was going to pull back from all the craziness. What that provided me with was time to think about what was important to me. And as an artist, it’s about having space, having time to let things happen inside of you.”

February 5, 2007 – When Jennifer stopped by ‘The Ellen DeGeneres Show’ on Friday (February 2), the talk show host presented her with funnel hats for J.Lo and hubby Marc Anthony to wear to the Super Bowl in Miami. TMZ and YouTube have since removed video.

Jennifer Lopez’s Ex Insists: Book Is About Me, Not Her

February 5, 2007 – Splash had a video, since removed, were Jennifer’s first husband Ojani Noa explained the book he’s trying to sell, which J.Lo is going to court to block, is mainly about him, not her. “I am upset because I would never talk badly about anybody,” Noa insisted. “The book is about my life and me coming from Cuba and meeting her. It is about a love affair… Of course there is some stuff about her – but I did not do what they said I did. Somebody sold it to the New York Post but it was not me… I’m not talking about her – it’s about my life – it’s about me. I’m sure she understands that, but if you look at her life and how its been for the past five years – she’s the one who has been married three times not me.”