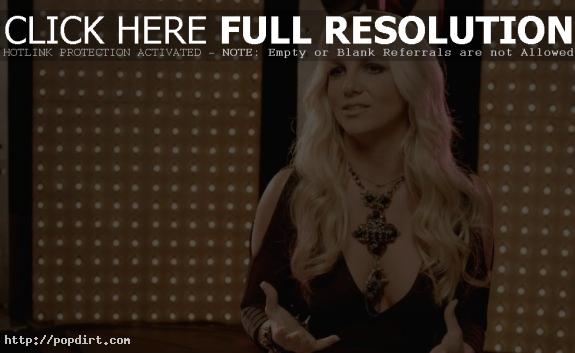 As part of Britney Spears’ VEVO Certified feature for the pop star having two videos getting 100 million views on the site, ‘I Wanna Go’ and ‘Till The World Ends’, she talked about some of the more popular videos she has done throughout her career. Included in Spears commentary were the videos to her debut single ‘…Baby One More Time’, as well as ‘Oops!… I Did It Again’, ‘Toxic’ and ‘I’m A Slave 4 U’.

“I think understanding the video process is really important for all of us as artists because it’s our one and only chance to really connect with the fans on screen, and for them to see us in our work in putting a picture and a song with a face,” Spears explained.

As for the first time she make that song and face connection in 1999, Spears said, “My first video was ‘…Baby One More Time’. I think I was 18 or 17 years old. I do remember somewhat of just the feeling of everything being so surreal, like making your first music video, there’s nothing like it. It was my idea to do the whole school girl outfit and us being at school and then having the dance numbers throughout it.”

Talking about another well known music video Britney did, the 31-year-old cited ‘Oops!… I Did It Again’. “Actually, ‘Oops’ was one of my favorite videos,” Spears said of the hit released in 2000. “The whole concept was us being on the planet Mars, so it’s just a kind of out there concept, which I thought would be really appealing to people. The camera actually fell on top of my head and busted my head open, and I was laying down on my back, and it was above me and the camera just fell right on my face. It was a really bizarre experience, but I got right back up. I think I was in shock and they put stitches in my head and I was like, ‘I’m ready to go!’ I was so ready to just keep shooting.”

Mentioning the video to her 2004 hit ‘Toxic’, Spears explained, “Well ‘Toxic’ I’ve always thought of something very character driven. I had always had that concept in my mind and it was just really perfect for ‘Toxic’. I just love all the different scenes, with a bunch of different girls, with a bunch of different looks and them having poison to feed to their man and to have her binge on her boyfriend, but at the same time they all go together, and they all come together to tell this one story and I think it’s done very cleverly.”

Watch what Britney had to say below the cut.