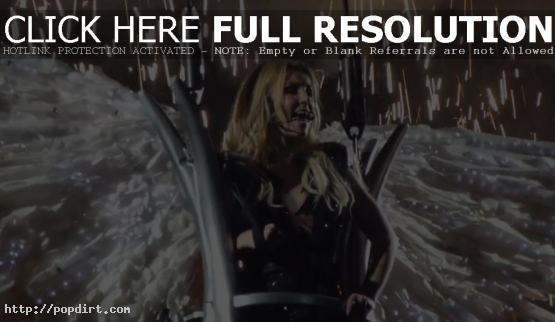 Britney Spears was on the phone with Ryan Seacrest of KIIS FM in Los Angeles last month. The pop singer was joined by Jeff and Jason Trawick and talked about how Jason is in such good shape to the envy of Ryan, getting the call from Simon Cowell to join ‘The X Factor’, how Simon claims she’s a “mean” judge, the difficulties telling people they wouldn’t cut it on the show, how she gets along with Demi Lovato, and her sons Sean Preston and Jayden James have been enjoying school.

On how she came about to be a judge on ‘The X Factor’, Britney explained, “I had a makeup artist with me for about 8 months on the road and she was just adorable and so much fun to be with and she was constantly talking about her previous job. She worked with Simon for awhile. We were just joking around about it. Wouldn’t it be cool if I went on the show or just visited again, genuinely just playing around about it and then all of the sudden I get this phone call from Simon and he was just adorable and so it was just something I had to do.”

Responding to Simon’s claim that she’s “mean”, Britney said, “I would have to say I’m a happy, honest judge. I use constructive criticism and I’m honest and I think I would want to know. It’s a big deal to give up your career being a doctor or whatever you want to do to do something you’re not really capable of doing.”

As for breaking news that a contestant was no good when the person thought otherwise, she said, “There were some that were just kind of ridiculous and you were kind of offended that they even thought they could, you were wondering if they were taking the whole thing seriously. You thought they were disrespecting the show by even coming on but then there the ones that were on and they really thought that they had it. You could see it in their eyes how believable they were about it, and it was really hard and it would break your heart to tell them no.”

On her conversations with Demi, Britney said, “We talk about anything and everything. She is a really cool, laid back girl and she’s from the south as well. She’s just a really nice, interesting person to be with.”

Talking about her two boys being in school, she said, “They love school. I thought the first day I was ready for them to come home and be like, ‘Mom! I hate school!’, but they came home and they were rockin’ and they were having fun and they had a great day, so I was like, this is nice.”

On letting her boys have their own phones and gadgets, she said, “I let my boys use my iPad and they think it’s theirs. I let them think it’s theirs, but it’s mine. As far as like a phone and really having one of their own, we’re gonna wait a while.”

On how her kids keep occupied, she said, “They’re obsessed. They go through these phases with their video games and what they want to play. They’re into Minecraft right now.”