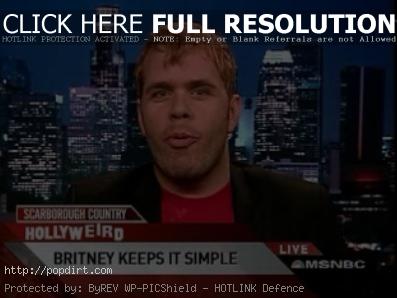 ‘Scarborough Country’ host Joe Scarborough discussed the buzz over Britney Spears’ next baby, the Hoff, and Jessica Simpson’s troubles with John Mayer with Katrina Szish of Us Weekly and Perez Hilton.

The segment, aired on MSNBC Wednesday (September 6) at Bing.com has since been removed.

September 6, 2006 – Radar Online reports Ashlee and Jessica Simpson were on hand at the MisShapes dance party on Saturday night. Jessica was dateless, but Ashlee was joined by her new squeeze Pete Wentz, bassist/spokesman for Fall Out Boy. The online mag reports that at one point, Ashlee had to excuse herself to vomit.

September 6, 2006 – The New York Post reports that in wake of reports in Us Weekly and People magazine that they were dating and even “in love”, John Mayer has already dumped Jessica Simpson due to Simpson and her pals being too loose-lipped. A friend of the singer/songwriter says that their relationship “was a 2 [that] her camp spun into an 11 … [Mayer] thinks it’s desperate … an attempt to stay in the spotlight.”

September 6, 2006 – Radar Online reports People and Us Weekly were furious with Jessica Simpson’s agent Rob Shuter after Simpson denied a romance with John Mayer on ‘The View’ Tuesday, days after Mayer posted an update on his website with Public Enemy’s single ‘Don’t Believe The Hype’. Both magazines had splashed front page stories on the romance after getting all-but-official assurances it was for real. “This was 100 percent Shuter,” says one person involved in the situation. “He broke all the rules of the game. He’s a pathological liar. I wonder how much Jessica even knew what he was up to.”

The story at radaronline.com has since been removed.

September 6, 2006 – Carson Daly joked during his Last Call monologue on Tuesday night, “I hate to start my own show by coming out here to be the bearer of some very, very terrible news, but you may as well hear it from me. It turns out that Jessica Simpson has just been forced to cancel some key television appearances, with what she’s calling throat trouble. It’s bad. Apparently, she’s been having some huge musical problems, because every time she goes to sing, she sounds exactly like Jessica Simpson… By the way, Jessica also wanted her fans to know that until she gets her voice back, she’ll be using the stage name ‘Ashlee Simpson’.”