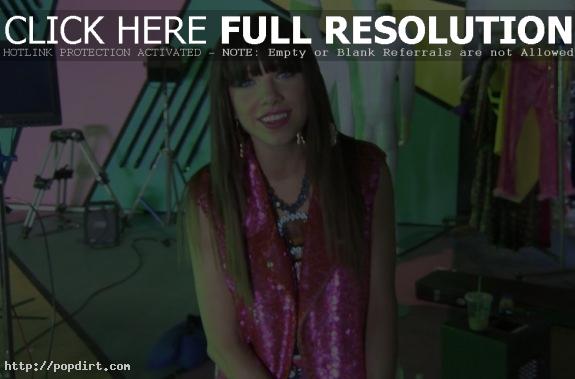 Carly Rae Jepsen is out with behind the scenes footage from her ‘This Kiss’ music video, featuring commentary from the Canadian pop star and the video’s director, Justin Francis. The song is off the Canadian pop singer’s second studio album ‘Kiss’, out now on 604 / Schoolboy / Interscope.

“Working with Carly is great,” Justin said. “She’s super involved. She’s really specific, and she knows exactly what she wants. We’ve had a good vibe, so we’ve been able to keep rolling with it and make sure the right stuff ends up on screen.”

Jepsen said about the video, “The concept for my music video ‘This Kiss’ was basically just this awesome party, the kind of party that I would want to go to and my fans would want to join in on.”

Describing the scene, Justin said, “Carly and her friends are kind of having a girls night out. The cool thing about it that separates it from everything else is there’s all of these super elaborate photo sets. One of theme is a Marie Antoinette set. Another is an African safari. There’s of course an ’80s set because there’s sort of a synth pop vibe with the song. The climax of the video is they go to one final photo set, which is sort of a recreation of a sunset, Caribbean scene. There’s actually a swimming pool there and Carly and her guy jump in the pool and have their first kiss underwater.”

Carly added, “Every room has its own theme and moment and I’m kind of chasing a boy around.”