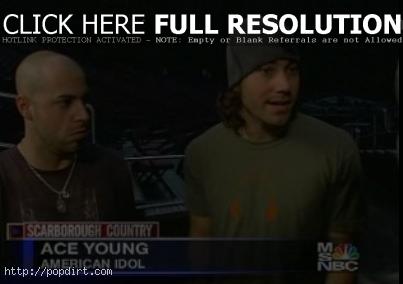 MSNBC’s Rita Cosby interviewed ‘American Idol’ season five finalists Chris Daughtry and Ace Young to get the dirt on what really happens behind the scenes during the Idols Live tour. The segment, aired on ‘Scarborough Country’ on Friday (July 14), at Bing.com has since been removed.

July 18, 2006 – Katharine McPhee has responded to reports that she has ditched the ‘Idols Live’ concert tour altogether, posting a letter on fan site KatharineFans.com. “I have heard a rumor that I will be missing the entire tour, I can assure you that that is completely false,” she writes. “I am looking to join the tour around the 21st. That is the doctor’s orders, not mine.” McPhee, who has been subject to an ongoing smear campaign by fans of ‘Idol’ champ Taylor Hicks, added, “Please also understand that in the upcoming future there’s going to be TONS of rumors and mean things that people say and do to try and bring me down. Sadly, that’s just the way this business works. Just know that in the future I probably won’t be able to clarify everything that is said in the media.” Read more.

July 17, 2006 – ‘Access Hollywood’ reports Katharine McPhee, who on July 5th blamed severe bronchitis and laryngitis for her inability to perform, was still conspicuously missing from the ‘Idol’ tour stop Thursday (July 13). “At the souvenir stand there were three tees for sale,” Access Hollywood senior field producer Tara said. “A collage of all the finalists, a Katharine tee and a Taylor tee. In the 15 minutes that I waited in line, not one Katharine shirt was sold. Taylor and team idol tees were flying off the racks.” ‘Idol’ judge Randy Jackson explained, “Singing a lot every night or every other night takes a wear on these kids, so she’s just trying to get her tour legs underneath her, but she’ll be fine.” 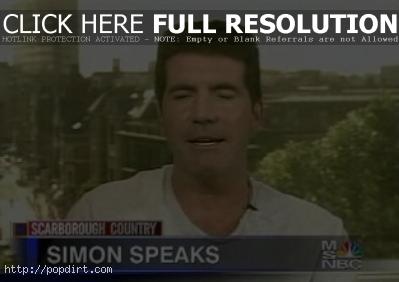 July 15, 2006 – Simon Cowell was in ‘Scarborough Country’ on Thursday night (July 13). MSNBC’s Rita Cosby talked to Simon about his relationship with Paula Abdul, the next season of ‘American Idol’, and Joe Scarborough’s musical talents. Video of the segment at Bing.com has since been removed.

July 10, 2006 – A source tells The New York Daily News that the ‘American Idol’ season five finalists now on a nationwide tour secretly despise Katharine McPhee for her diva-like behavior and the special treatment they feel ‘Idol’ producers have bestowed on her. McPhee skipped the first three weeks of the tour claiming to have bronchitis, and the others are not looking forward to her return.