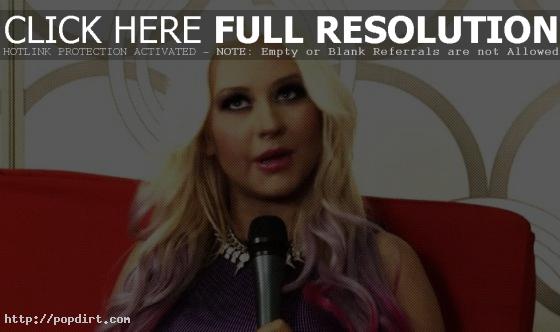 Lance Bass sits down with Pop Diva Christina Aguilera to talk about her top music picks and her upcoming performance at the 2012 AMAs!
Aguilera talked about how she’s been living a dream, what people should expect from her seventh album ‘Lotus’, working with Max Martin on the project, being part of ‘The Voice’, and what’s on her music playlist.

Asked if she’s “living a dream”, Aguilera said, “Absolutely. I couldn’t imagine doing anything else. I’m definitely put here on this earth to do what I do and constantly grow and evolve. It’s been a really incredible journey.”

Discussing what fans can expect from her new album ‘Lotus’, Christina said, “All of my albums do represent parts of me at different times in my life. I take my time between the records because I want them to truly reflect the person that I’ve sort of grown and become from the last record. It’s about freedom and independence. A lot has gone on since the last time I had a record out, and that one, ‘Bionic’, was to reflect being a new mom and feeling like you’re all bionic woman person, musician, person, artist. Now, it’s just a place of everything that felt good to me instead of trying to, (‘Bionic’) was very futuristically inspired, but this one, it’s fun. It’s got elements of everything. I think my fans will really appreciate it. It’s supposed to reflect, throughout, the lotus to me represents this unbreakable flower that throughout the harshest of weather conditions, throughout the roughest of times, it still thrives and remains strong and beautiful. That’s sort of what the record represents.”

Talking about her work with Max Martin on the record, who co-wrote the album’s first single ‘Your Body’ as well as ‘Let There Be Love’, the pop star said, “He’s been nothing but fabulous. I think we both respect each other as artists. He actually can sing. I didn’t even know. He’s behind the board. A lot of people don’t know that. It’s great when you get behind the board with a producer that gets behind the board, he’s so involved. He’ll actually give some vocal ad-lib ideas. I’m like, ‘Okay Max, I didn’t know you could sing.’ You wouldn’t know. The experience of working with him as been great and I know the fans are excited to see us team up. He’s cranked up amazing pop hits over the last decade or so, so it’s great that our paths have finally crossed.”