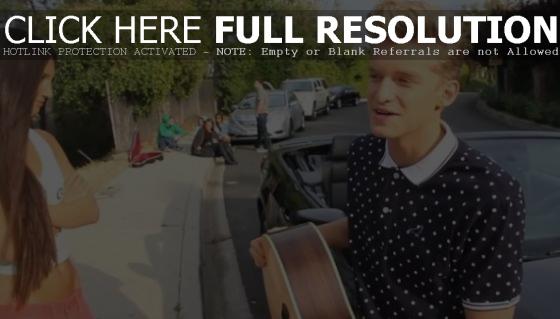 Cody Simpson is out with behind the scenes footage from his ‘Pretty Brown Eyes’ music video. The track is off the Australian pop singer’s upcoming album ‘Surfers Paradise’, out July 16th on Atlantic Records.

The Cameron Dutty directed video features an appearance from Jessica Jarrell, sporting a new hair color. “We are at Cody Simpson’s ‘Pretty Brown Eyes’ video shoot. I’m about to get in the pool right now. It’s freezing, but Cody is my best friend, so I’m gonna do it.”

Alli said of Dutty, “He is literally one of the coolest guys I know.”

Explaining the video, Dutty said, “The concept of the video is just having a good time, California party, California pool, California girls. It’s good, on point, always fresh. Fresh out of the box!”

The video ends with Cody stating, “We’re about to wrap on the set of my new video, ‘Pretty Brown Eyes’, and you guys gotta check it out. It’s gonna be pretty sick.”