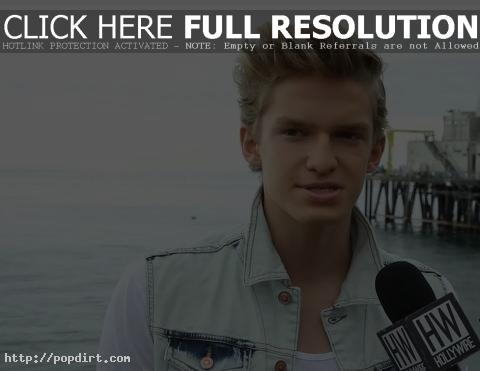 Hollywire caught up with Cody Simpson recently outside his Pastry Shoes photo shoot at the Santa Monica Pier. The Australian pop singer discussed how he’s drawn to the shoe line, the charity work he has been doing, his remix of the Frank Ocean track ‘Super Rich Kids’, going home for the holidays, and turning 16 in January.

Talking about his attraction to Pastry Shoes, Cody said, “It’s just something that, I love the shoes on girls. I’ve got a couple of mates that wear them. My sister loves those shoes.”

On his work with DoSomething.org, Cody said, “One of my New Year’s resolutions last year was to be able to be more charitable and do more for charity and stuff like that, and I’ve really accomplished that this year. I’ve done a lot for DoSomething.org and I’ve done a lot for Defeat the Label, anti-bullying, stuff like that. I wanted to do as much as I could to help out in any way I can and use my powers for good.”

On his ‘Super Beach Kids’ remix, Cody said, “I was listening to the song and said I have to do something for this. I ended up writing this whole thing in like 30 minutes, and I wanted to put it out. We’re definitely creating something much bigger around it all. It’s kind of the crew now, SBK.”