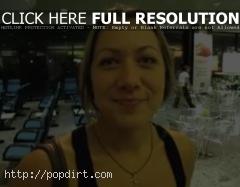 Colbie Caillat checked in with fans from an airport in Brazil, heading back home after a brief tour in the country. Next up is a two week trip to Kauai, Hawaii coming up in January, where the she’ll be working on her sophomore album, joined by Jason Reeves, Jason Mraz, family, and friends.

The clip at MySpace can be viewed below.