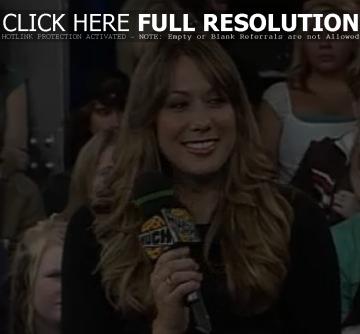 Colbie Caillat dropped by ‘MuchOnDemand’ in Toronto on November 12th to talk to VJ Leah Miller about her recent rise to fame thanks to MySpace, how her life has changed so much in the past year, loving the tour bus, her musical family, driving her older sister crazy by singing in the morning and waking her up, the inspiration behind ‘Bubbly’, and writing while on the road.

On her whirlwind success, Colbie said, “My life is so different now. I’m on a tour bus and I’m with my band all the time. We’re travelling to different countries and all over the United States. The album just went platinum, so it’s overwhelming. It’s exciting.”

Colbie added that she’s a fan of the tour bus. “It’s the best place to sleep. I actually sleep there over my hotel room,” she revealed. “It’s cozy and the motor kind of rocks you to sleep.”

Asked about working with her dad Ken Caillat on the ‘Coco’ album, she said, “It was great. I’ve always wanted him to be producing the album or be involved in it in some way. He’s got all these ideas from producing back in the ’70s and all these old techniques of recording.”