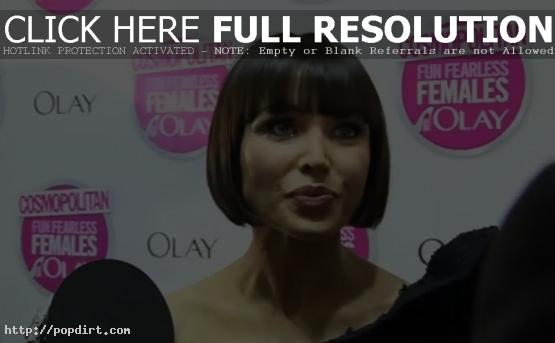 Dannii Minogue has given birth to a baby boy on Monday afternoon at Melbourne’s Royal Women’s Hospital, where the ‘X Factor’ judge was joined by boyfriend Kris Smith. Minogue’s spokesman Simon Jones said: “Kris Smith and Dannii Minogue are thrilled to announce the arrival of Ethan Edward Smith on July 5. Mother and baby are doing well and Dad is very proud. They request their privacy at this special time to adjust as new parents.” Dannii’s plans for an at-home birth were squashed after she reportedly had complications. Dannii’s sister Kylie Minogue told her Twitter followers (@kylieminogue):

Congratulations to my little Sister, @danniiminogue and @krissmith13 on their beautiful baby boy, Ethan. He is gorgeous!!!

Watch a report from ITN below.

Boyfriend Hints Dannii Minogue Is Having A Girl

May 9, 2010 – Dannii Minogue’s boyfriend Kris Smith is reported to have let slip the couple are expecting a girl. “There’s been a few sleepless nights but it will be all worth it to see her beautiful little face,” Kris said at a charity event in Australia.

“I’m a very lucky girl,” Dannii had earlier said of her boyfriend’s handling of her pregnancy. “He’s just the best boyfriend every. He says all the right things with my changing shape because I’m kind of going ‘whoaa, this is really weird, I don’t even look like me’. He’s like, he loves it, the bigger I’m getting he loves it.”

Watch a report from ITN below.

Dannii Will Be Back On ‘The X Factor’

April 10, 2010 – Dannii Minogue is set to return to ‘The X Factor’ in September even though she’s due to give birth to her first child in July. “The vibe about Dannii is very positive,” a source close to the show’s boss Simon Cowell told News of the World. “She had a great year on the show. Everyone’s keen to work out a way for Dannii to be involved as much as possible.” Since Dannii won’t be available for the audition phase during the summer, show producers are looking for guest judges like Beyonce to fill her position.