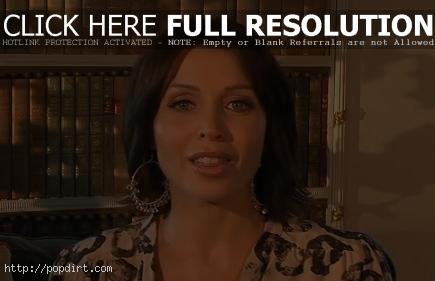 Dannii Minogue is opening with her new book ‘My Story’ about her time on ‘The X Factor’ which began with a verbal tirade from Sharon Osbourne minutes before her first live show on the ITV program. While Dannii was having her make-up finished, Sharon stormed in and read her the riot act over gossip from the British tabloids. “I tried reasoning with her. ‘Sharon, they are just stupid press stories about a non-existent feud. All I’ve ever done is tell people how much I admire you but they don’t want to print it,'” Dannii explained. “‘Oh, don’t play the innocent,’ Sharon spat. ‘Cos if you wanna play games, Missy, I’ll play… don’t you worry, I’ll play!’ I froze in my chair as furious Sharon came towards me. I turned to look at my friends Terry and Mark, whose mouths had fallen open in horror. Then I caught a glimpse of my make-up girl Karen, who was frozen, holding a mascara wand in mid-air.”

Additional excerpts from the book at newsoftheworld.co.uk have since been removed.