Dannii Minogue ‘You Won’t Forget About Me’ Video 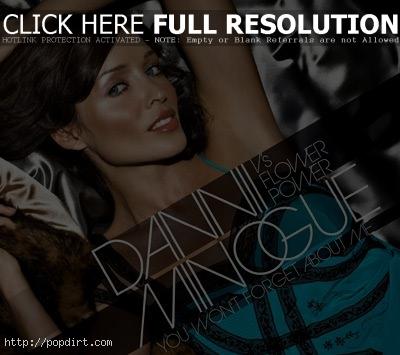 Dannii Minogue is out with the music video to her new single ‘You Won’t Forget About Me’, off the Australian pop singer’s compilation album ‘The Hits & Beyond’. Watch it online below.

September 19, 2004 – The Mirror reports that Dannii Minogue has landed a “substantial role” in a film patterned after ‘The Sixth Sense’. “It’s not just a cameo part – Dannii’s going to be getting her teeth into a very substantial role,” a film insider revealed. “She is quite apprehensive as she will be working with some of the most respected people in the industry but she has done a lot of TV work and they’re convinced she has the talent and looks to carry off the part.”

Dannii’s ‘You Won’t Forget About Me’

September 11, 2004 – Dannii Minogue is out with her new single ‘You Won’t Forget About Me’ featuring Flower Power. The single is set for an October 18th UK release on Minogue’s All Around The World Records. Kylie’s sister will release her fifth album in early 2005.

September 11, 2004 – The Mirror reports that Dannii Minogue was partying aboard the HMS Delphinium in Cannes when she peered down to the lower deck – and spotted a drooling Phats, from dance act Phats and Small, enjoying the upskirt view. “She was pretty shocked when she saw Phats blatantly staring up her skirt,” a partygoer remarked. “She asked if he was getting a good eyeful, and he replied ‘Yes, thanks,’ and carried on gawping. It was only when the party’s security guards saw what he was doing that he scarpered.”

Dannii Minogue’s brand new single ‘You Won’t Forget About Me (Flower Power)’ will be released in the UK on Monday, October 18th, on All Around The World Records. The instrumental track Flower Power has already topped the Club Charts and has been named by Pete Tong as one of his Essential New Tunes of 2004.

«Hilary Duff Sporting ‘Joel’ Wristband
What Is The Deal With Christina Aguilera’s ‘Beautiful’?»