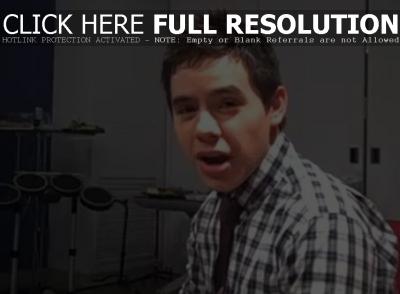 David Archuleta said hello in a video clip at his YouTube channel from backstage at ‘Total Request Live’ on the release day of his self-titled debut album.

“We’re just backstage here for ‘TRL’, waiting to get up on stage to perform the song,” the ‘American Idol’ season seven runner-up said. “We’re playing some games and having snacks and hanging out, having a good time. That’s pretty much it right now, I’m just kinda waiting. I already went to soundcheck, and everything sounded good. If any of you are out there waiting in line right now, it will be fun, we’ll have a good time together. If you’re on the other side of the camera, watching at home on TV, hope you guys have a good time watching it.”