David Archuleta Checks In With Tour Update From Arizona 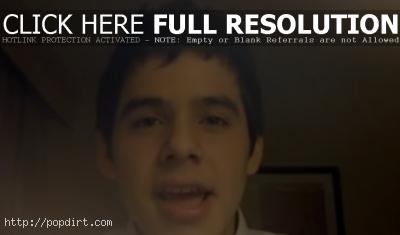 ‘American Idol’ season seven runner-up David Archuleta checked in while on tour in Arizona, talking about shows in Oklahoma City, a couple small shows in Texas, a day off in Albuquerque, going to the 3D movie ‘Coraline’, never getting sick of Thai food, having California next up on the tour schedule, and he appealed to donate to the Rising Star Outreach foundation.

“I’m in Arizona. We had a day off and it was awesome,” David said. “I had such a great day today and it was nice to be able to focus on other things aside from the tour, even though tour has been awesome too. After every show I’m like, I can’t believe we’re going to the next city and perform for that audience and see what it’s like. Every day has been good for this past week.”

He added, “My mom came to join me on tour in Oklahoma City. It’s been fun. She’s been with me since and I’ve just been having a fun time with her. After Oklahoma we had the two Texas shows and they were the two smallest venues of the tour, but I really liked it actually. I liked how up close and personal it was. It felt like a campfire thing. We’re all like gathered around. After the Texas shows we had a day off in Albuquerque and it was nice. I worked out, went to the exercise room at the hotel and went running and did all that fun stuff. Afterwards, my mom, Kendra and I went to see ‘Coraline’ the 3D movie that’s out right now. There’s one part about it that really bothered me, but other than that, I thought it was a really cool movie. It was really interesting, so creative and I really like those kind of movies. It was really spooky. I had a fun time.”