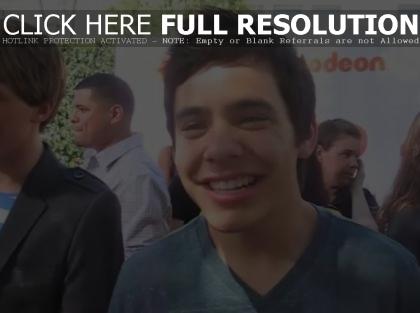 David Archuleta spoke with Popstar! magazine at the premiere of ‘Fred: The Movie’. The ‘American Idol’ season eight runner-up talked about being a fan of Fred, who is played by Lucas Cruikshank and having his new song ‘Elevator’ released to radio the prior day. “It’s a goofy, dorky song, but I’m just really happy to get to do music that’s more fun and I don’t want to be anything I’m not,” Archuleta explained. “I don’t want to pretend I’m this cool hunk or anything, I’m a dork. I just want to introduce people to David Archuleta, let them know it’s okay if they’re not the cool, cookie-cutter model of someone. You can be who you are and you don’t have to be the coolest person to be successful.”

One thought on “David Archuleta: I’m A Dork”