David Archuleta Locks Himself Out 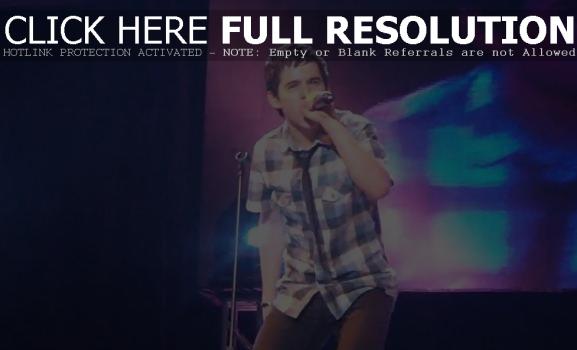 David Archuleta checked in with fans on his official web site’s blog on Tuesday (June 16), talking about tour rehearsals in Connecticut, recording a Christmas album in Los Angeles, and locking himself out of the house back home in Utah. The ‘American Idol’ season seven runner-up writes:

Before I came to Connecticut, I got to spend the night (and just for the night, not even day) in Utah. I couldn’t sleep, and I mentioned the cats on twitter… But I wrote a letter to a friend and put it in the mailbox that night, or I guess morning lol, so I wouldn’t forget to send it before I had to leave to CT. Well funny thing, when I turned the door knob it was locked. You can open it inside but not on the outside. I didn’t have my phone with me, and no one was answering the door. I tried throwing small pebbles at the window but that didn’t work either. So there I was in my PJ’s outside, without shoes, and cold! I ran down the street to keep the blood going and went to a friend’s house, hoping they’d be awake or more responsive than at my place haha. I knocked on the window that I thought was my friend’s room, but I’m guessing that I guessed wrong or he wasn’t awake, or something. I went back to the front and just knocked on the door, and thankfully his dad happened to be awake. So he opens the door and there I am standing in my PJ’s feeling stupid, but I was so glad to go inside somewhere warm! Anyway I eventually got back into the house, and headed to the airport a couple hours later heh. Well I thought I’d share that story with you all lol.

4 thoughts on “David Archuleta Locks Himself Out”