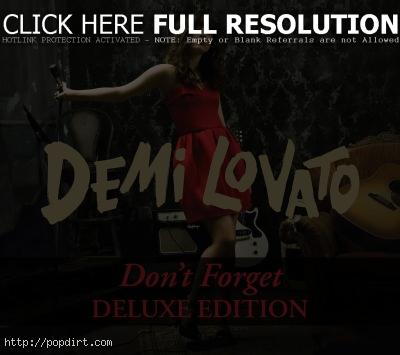 Demi Lovato updated fans on her blog at MySpace (@demilovato) on Tuesday (March 31), talking about the release of her album ‘Don’t Forget’ Deluxe Edition today. The ‘Sonny with a Chance’ star tells readers:

I’ve recently been doing a lot of communicating with you all through twitter which is such a quick and easy way to talk to so many of you! (If any of you are wondering, my twitter name is – ddlovato)

Anyway, that’s why I haven’t gone myspace crazy on you guys…. I’ve just been obsessed with twitter. haha

Well today the Don’t Forget Deluxe Edition Released today and it has a ton of bonus footage of me in the studio, footage of tour this last year and more backstage clips of hanging out with JB.

It would mean the world to me if you checked it out today and help spread the word!

Thank you guys so much. I love y’all more and more each day.