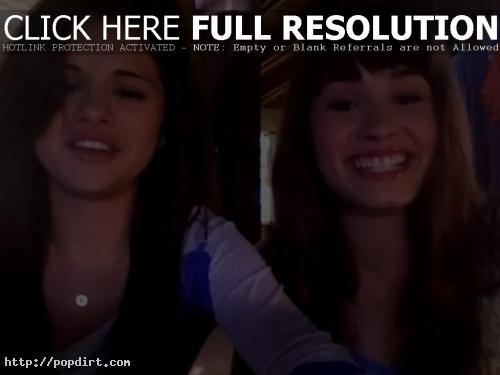 Entertainment Weekly spoke with Demi Lovato as part of their Fall Music Spotlight, where the ‘Camp Rock’ star talked about her debut album ‘Don’t Forget’ and offering a more rocking sound than her Disney peers. “Kelly Clarkson, when she first went rock, was totally my inspiration,” Lovato explained. “I decided to try it and it was like, ‘Wow, this fits more.’ I realize, though, that I am a pop singer. And I’m not gonna try to be too ‘Oh, I’m hardcore, I’m a rock girl.’ No, I’m with the Disney Channel! But bubblegum isn’t really my thing.”

As for that YouTube video from Miley Cyrus poking fun at Demi and Selena Gomez, the 16-year-old said, “Um, I really don’t know Miley that well. We didn’t take offense or think it was a negative or a positive. It was just like, OK, cool, Hannah Montana knows who I am! She gave me advice on publicity and making it big, and she was like, ‘I hope you’re very successful.'” Read more.