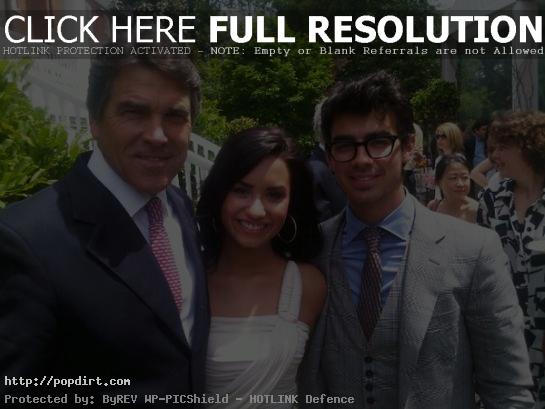 Demi Lovato and her boyfriend Joe Jonas of the Jonas Brothers spent some time with the governor of their home state during a trip to Washington, DC on Saturday (May 1) for the White House Correspondents’ Dinner party. The couple looked happy posing with Texas Governor Rick Perry. Demi told her Twitter followers:

“Oh man, look at that, we look awesome!” – @governorperry hahaha so awesome

Jemi’s appearance in DC seemed to get the Jonas Brothers young female fans feeling renewed hatred towards the ‘Sonny with a Chance’ star on Twitter. Among the remarks directed her way (user names censored):

Joic****stDoIt @ddlovato hope someone will kill you while you’re there! B*TCH!

Joic****stDoIt @Joi****zz lol, I’m glad you reached the “die” level of hate :P Its the best level of all times! Like DIE @ddlovato DIE! xP

Miik****hhh @ddlovato FU** OFF AND GO DIE IN A HOLE! You’re just annoying everyone by being alive you fat wh*re

Check out an image of Perry with Jemi and Nick below the cut.