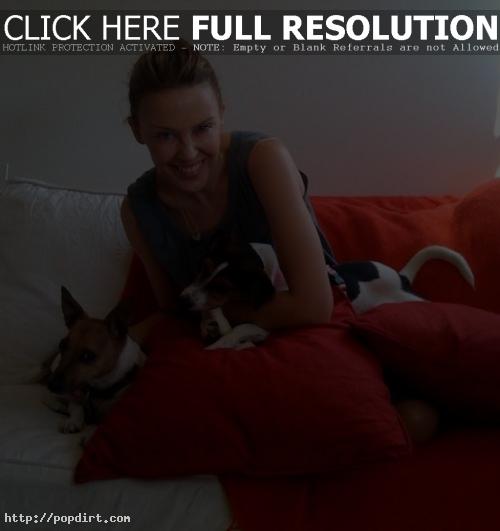 Kylie Minogue has been enjoying hanging out with some canines while in the studio. The Australian pop singer told her Twitter followers (@kylieminogue):

Aaahh…….You want to know more about the doggies??? Another day in the studio and I managed to leave without stealing them!

September 3, 2009 – Kylie Minogue was spotted leaving her home in London, England on Wednesday (September 2). The Australian pop singer is gearing up for her U.S. tour beginning at Fox Theater in Oakland on September 30th, and mentioned to her Twitter followers (@kylieminogue):

Pinch, punch…and all that!! OK, September has finally arrived, now counting down the days until San Fran lift off!!!!! :)

August 29, 2009 – Kylie Minogue smiled as she left her London home on Saturday (August 29) in London, England. The pop star may have been smiling after learning surveying company Talent Inc. said she’s Australia’s best-known personal brand. “Although she’s had ups and downs in terms of her albums, and especially in her… love life and her health, she’s always managed those things with grace and integrity,” company spokesman Mark Richardson told AAP. “Over a period of time it’s given her brand a real strength and value.”