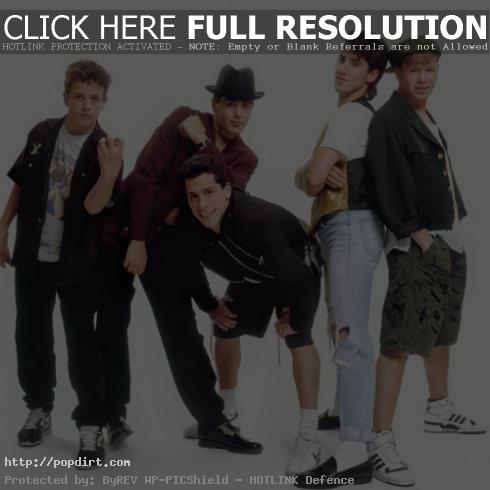 Former New Kids on the Block star Donnie Wahlberg stopped by Late Night with Conan O’Brien on Friday to promote his new TV show ‘Boomtown’, though much of the conversation was about his NKOTB days. Donnie talked about how they played in the prison system before they made it big, and how his son isn’t too familiar with the boyband, instead being a fan of Slipknot. Read on for a portion of their chat.

Conan: You know, we have something in common, which is, we sort of grew up in the same area in M. And I remember when I was living in Boston and
the new kids hit, it was huge. It was just this huge experience. And Joey, from the new kids, McIntyre, he bought a house right next to my parent’s house, like, a couple of streets over.

Conan: It never did!

[ Laughter ] That must’ve been intense for you, too, is that right?

Donnie: Yeah, but it’s nice to know that, you know, beneath the jealousy, there are people like you who really wanted that for themselves, you know?

Conan: This is a true story. Like two Christmases ago, I came home,
and my mother, at one point, said, “there’s some girls hanging outside the front of the house.” And I was like, “Yes, this is great. I’ve always wanted this.” So I went out, and I was like, “girls, please, I need my privacy, you know?”

[ Laughter ] “I’m a person. Leave me alone.” And they said that they
were on their way over to Joey’s house –[ Laughter ] — And that they had
just stopped off for a second.

Donnie: That actually happened to me before. I had girls — and you
know, they were always outside mine too. But one day, I went out, and I said,
“Hey, how you doing?” And they said, “Hey, we just wanted to know how to
get to Jordan’s house.”

Conan: “Thanks a lot. Thank you. Did you really say that?”

Conan: Now, when you guys first started out, you were playing anywhere you could get an audience. You were playing prisons at one point, is that
true?

Conan: I was gonna say, I wouldn’t suggest that the boy bands today
go to a prison.

Donnie: Not long. The funny thing is though people think we were this
huge, overnight sensation, but we really weren’t. We were doing for about four yve we could do, and we did three prison appearances. One of them, my older brother was in the prison, and he was the promoter for the show.

Conan: It’s nice to know somebody there.

Donnie: No, it was pretty remarkable, but, you know, we used to be,
you know, obviously, we hated to get booed anywhere, but to go into a prison, I mean, god, if you fail on a prison concert, you might get raped, you might get
murdered. There’s no telling what could happen. So what we used to do is we would come up with strategies to win the inmates over, and what we did the first time is I smuggled in a couple cartons of cigarettes. And so, at the end of the show, I just started throwing them out, and I handed it out to some of the guys in the group and we all threw them out, and the inmates went crazy, and word spread throughout the prisons in Massachusetts about the new kids, you know, they would come and throw cigarettes out. And so, everybody wanted us out there.

Conan: You didn’t really need an act at that point, really.

[ Laughter ] You could just’s the new

on the block and their cigarette-shooting machine.”

Conan: Wow. Now, you have children yourself now.

Conan: Two kids. Are they performers? Can you see it in them? To perform?

Donnie: Well, I have a 1-year-old who — I don’t know with him t,t,
but my 9-year-old, my son Xavier, he plays guitar. He doesn’t really know about my musical tastes. He knows a little bit about it. But I think he heard about. The first time he really knew about is he heard Eminem singing a song about us, and said the new kids sucked or something, and he was like, “dad, weren’t you in that group?”

Donnie: Yeah, I mean, he loves them. And it’s like — I don’t know,
they, like, have these bloody masks and all this weird stuff, and ‘sike,”They’re cool they’re cool,” and he’s learning all their songs. So I try to teach him some older songs like — he’s learning “Stairway to Heaven” now for me. And “Smells Like Teen Spirit” by Nirvana, for he does these

5 thoughts on “Donnie Wahlberg Talks New Kids On The Block”