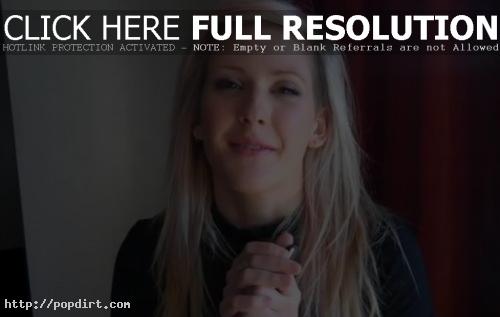 Ellie Goulding was in studio with Ryan Seacrest of KIIS FM in Los Angeles recently, where the British pop singer talked about spending time in America, how ‘Lights’ was released in America well after the UK, the difficulty she’s having singing songs off her second album ‘Halcyon’, being afraid of the dark, and and thinking she’d become a personal trainer while studying theater in college.

On America, Ellie said, “The last couple of years, I’ve spent a lot of time here. It was about a year ago that I started touring and promoting and stuff.”

On the long delay before ‘Lights’ was released in America, she said, “It’s about 3 1/2 years old now. When we released it in the UK which was a while ago now, it was like the sixth or seventh single from my album. It was kind of a point where I was ready to write a new album anyway, so I didn’t put much into it. Then all of the sudden, it was like ‘Lights’ is on the radio a lot in the US, and that was it. It started it rolling.”

As for why ‘Lights’ found success, she confessed, “I literally have no idea. I don’t know. Maybe just people, it’s a song that American people get more than British people? I don’t know.”

Talking about how the songs on her new album might be more difficult for her to sing, Ellie said, “Even in rehearsals, I felt myself wetting up a little bit. Not on my last album, but these songs in particular really are emotional and they mean a lot to me. They’re about really personal things so, it’s a good thing though. If it evokes that kind of emotion in me, then hopefully it will be the same on people.”

On how ‘Lights’ is about her, she explained, “I’m kind of afraid of the dark. It’s got better now, but I used to not be able to sleep with the lights off. I used to share a bedroom when I was young with my two sisters until I was 18, and when I went to university and I was by myself, I couldn’t bare it. It was weird because it was weird that I was by myself. I still find it quite weird.”

Talking about how her time in college studying theater had her thinking she’d become a personal trainer, Ellie said, “I really, really loved physical theater, and at univesity I got really into running and martial arts and stuff. My interests are moving away from theater, more of to the physical side of things. I enrolled in loads and loads of classes in physical stuff. Running is my thing. I just wish I could run more. I feel really unfit at the moment.”