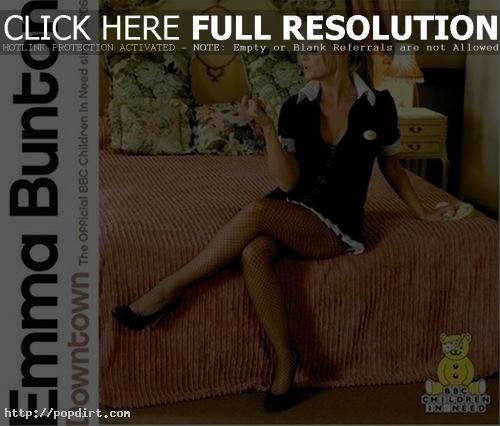 Former Spice Girl Emma Bunton is out with her new single ‘Downtown’, a remake of Petula Clark’s 1964 hit ‘Downtown’, released in support of the charity Children in Need. “I’ve always loved Downtown as a song and I’m really looking forward to putting my own stamp on it,” said Bunton, who is currently competing in ‘Strictly Come Dancing’,the British version of ‘Dancing With The Stars’. “The track’s good fun and one everyone will know. The video should be a good laugh – I’ve asked all the ‘Strictly’ guys to come along, if they have time, and show off all the hard work we’ve been doing – and hopefully there will be a few other surprises in store, too!” Listen to the track at YouTube.

October 16, 2006 – Former Spice Girl Emma Bunton spoke with Neil Sean of Sky News about her participation in the British version of ‘Dancing with the Stars’, ‘Strictly Come Dancing’. She said, “It’s a real departure for me and I could dance a bit before but nothing like all the ballroom stuff.”

October 15, 2006 – The Mirror reports Emma Bunton is lobbying her former Spice Girl bandmates to reunite at her wedding next March, where she’ll make things official with her boyfriend of eight years, Jade Jones. “Emma is still good friends with all the girls,” one of Jade’s friends explained. “She’ll definitely have them at the wedding and wants them to do one of their hits at the reception. From what I’ve been told Emma wants to ask the girls when she sees them all again.”

September 7, 2006 – With Destiny’s Child star Beyonce Knowles turning down a chance to reprise her role in the new ‘Pink Panther’ film, former Spice Girl Emma Bunton is hoping to land the sidekick role opposite Steve Martin. “It’s my ambition to move into films and that kind of role would definitely appeal,” said Bunton, who is currently working on her third solo album.